The Book Of Revelation: What We Learn From The Seven Churches

The seven epistles that Jesus wrote to seven churches warn Christians against losing their fervency and love for Christ. In his ongoing Bible study series on the Book of Revelation, Pastor Kong Hee expounded on each of these letters, reminding the church to stay sensitive to the Holy Spirit.

The Book of Revelation is widely known as the part of the Bible that contains prophecies about the End Times. It captures the imagination of believers and Hollywood alike. 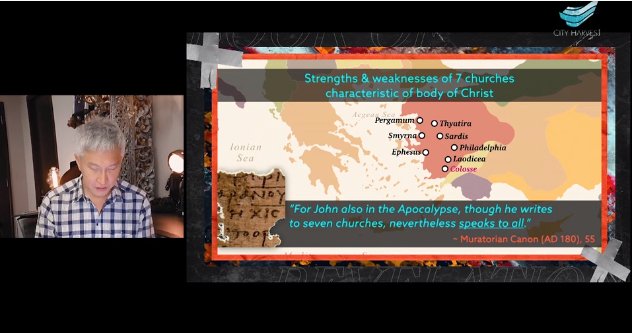 At the beginning of the Book, there are seven epistles that Jesus, through the hand of Apostle John, wrote to seven prominent churches of that time. The importance of these seven letters lies in their warning against complacency in the Christian faith.

In Revelations 1:11, John heard Jesus telling him to, “Write on a scroll what you see and send it to the seven churches: to Ephesus, Smyrna, Pergamum, Thyatira, Sardis, Philadelphia, and Laodicea.”

Pastor Kong explained that even though there are many other churches under John’s supervisor at that time, Jesus wrote specifically to these seven churches because each of them reflects unique strengths and weaknesses that reflect the spiritual conditions of the body of Christ today.

“The Muratorian Canon of AD 180 (a Latin list of New Testament writings regarded by Christians as scripturally authoritative) states, ‘For John also in the apocalypse though he writes to seven churches, nevertheless, speaks to all’,” the pastor explained. “So all these letters were specifically addressed to these seven churches; their messages are meant for churches everywhere in every generation.”

In the seven epistles, Jesus warned that the church must guard against the following dangers: losing its first love, the fear of suffering, doctrinal compromise, moral compromise, spiritual deadness, the failure to preach the Gospel, and becoming lukewarm to God’s Kingdom.

Unfortunately, five of the seven churches did not repent. “Eventually, they and their cities were all destroyed by foreign invaders and their churches were ruined. According to the secular historian Edward Gibbons, Ephesus was totally desolated. Pergamos and Thyatira became centers of another religion. Sardis was reduced to a miserable village and Laodicea was also devastated. Only Smyrna and Philadelphia—the churches that received Jesus’ praise—were still thriving many centuries into the Middle Ages,” the pastor said. 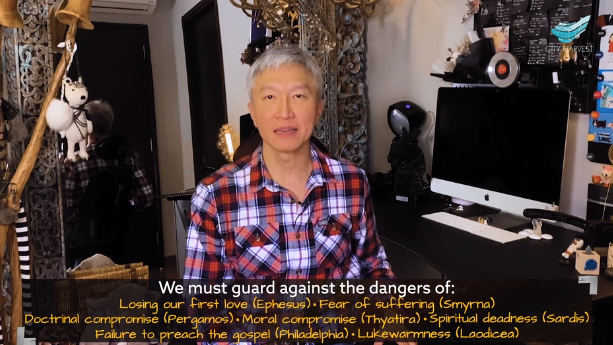 STUDYING REVELATIONS ACROSS THE REGION
The Book of Revelation Bible study series is streamed online, on CHC’s official accounts on Facebook Live and YouTube Live, as well as via The CHC App. Overseas churches in CHC’s The Harvest Network have also been joining in the weekly webcasts.

At Fire Harvest Church in Taiwan, a group of around 20 members would meet at their church to watch the online Bible study together. At the end of the session, there are 10 minutes of question and answer for the members to discuss what they have learned.

The senior pastor of Fire Harvest, Jacob Lin, found out about the Bible study series from the video announcements on CHC’s weekend services. He tells City News that besides the 20 people gathered at Fire Harvest Church, there are also members watching from home.

“From every church in Revelation that we have studied, there is a lesson to be learned,” he noted. “Not to lose our first love, the fear of suffering for Christ, compromising doctrines, compromising their morals and becoming lukewarm. There are churches today like these churches in Revelations—they are churches only in name. That is the reason why I started Fire Harvest. This Bible study series reminds me to keep checking to ensure that we are on the right path.”

Of all the lessons, Pastor Jacob found the concluding lesson on the seven epistles the most memorable. “All the lessons are great but the fifth lesson on the Sardis, Philadelphia and Laodicea churches spoke to me the most,” he said. “Thinking about these churches that have stopped preaching the Gospel and become lukewarm, reminds me to keep guarding my heart in prayers.” 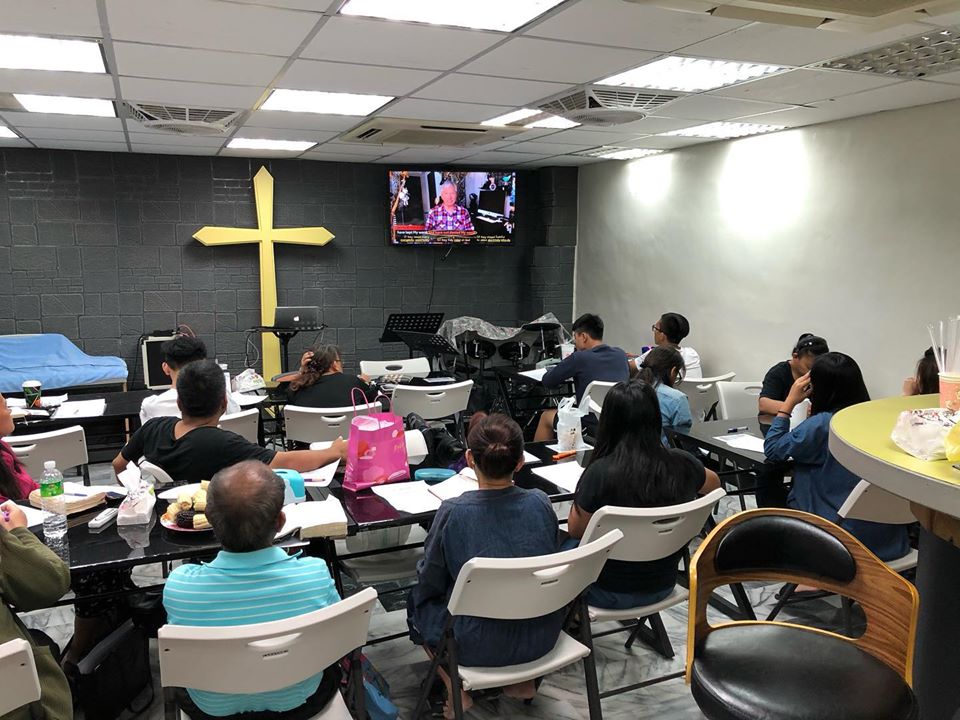 Pastor Brandon Ramirez from Unbound City Church learned about the Bible study series through the church’s social media updates and his friends from CHC. The senior pastor would encourage his members to join in the Bible study online, and then they would gather to on the following Sunday each week to discuss that week’s study.

“As of now, about 20 members have committed to do the class every week,” says Pastor Brandon.

He believes that this Bible study series can transform a person’s life. “As we study the Book of Revelation, we are learning things that transform our being. Some people go through this Book trying to seek the right things to do. They are looking for directions and instructions so they can put them into action. But when we look carefully, the ones that really overcome in this book are those who were willing to be molded in their being—we, as believers, transformed into lovers of God, lovers of people and truth. When the being—the inner state of a person—is dealt with, then the outward action is easier to accomplish. It is easier to walk in God’s ways when we are not in His way while He is molding us.”

Senior Pastor of Grace Community Church, Mibsam Manu also follows the Bible study online, together with his wife who is currently in Singapore studying in CHC’s School of Theology.

Pastor Mibsam finds all the lessons enriching, “but the lesson for the church in Ephesus was especially good—I’m reminded to not let go of my first love. Love must be my top priority, and also, love is the testimony of the church,” he said.

“I’ve learned so many things in this Bible study series,” he adds. “I’m always inspired by Pastor Kong and how he studies and prepares all these teachings. I also like the short worship before the lesson with Pastor Kong and Sun; it is very real and very authentic. There is so many revelations every week but the one thing that I will always remember is ‘love is the testimony of the church’.”