In his commencement message to the Class of 2019 of the School Of Theology, Pastor Bobby Chaw encouraged the graduating students and the congregation to stay in earnest expectation and they shall see the promises of God come to pass. 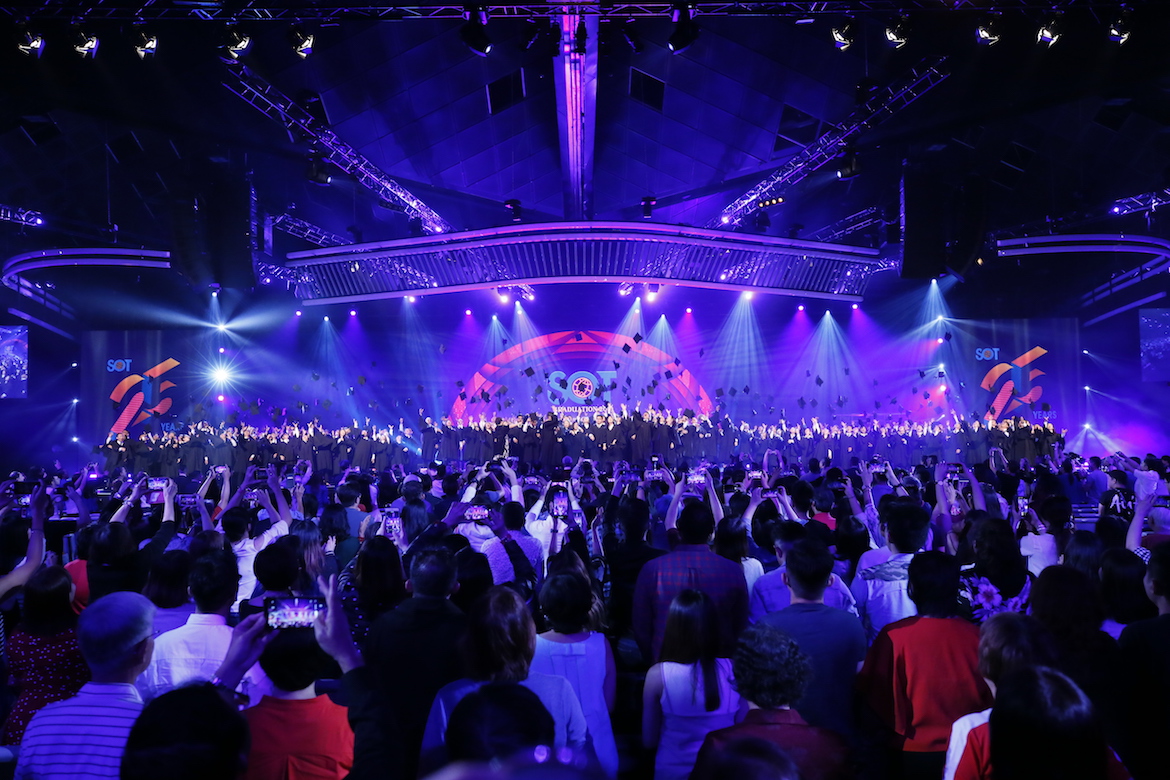 City Harvest Church’s School of Theology graduated its 25th cohort this past weekend (Sep 28 and 29). The Bible school has graduated 7,923 students in its 25 years, and those graduates are now serving the Lord in 41 countries and territories all over the world.

The graduating batch of students ran the entire service as a showcase of the skills they had learned from their seven months of Bible school. The praise song “I See Your Fire”, led by Megan Khaw (also a City News volunteer writer), was written by her and the SOT worship team together with their mentors from CityWorship. 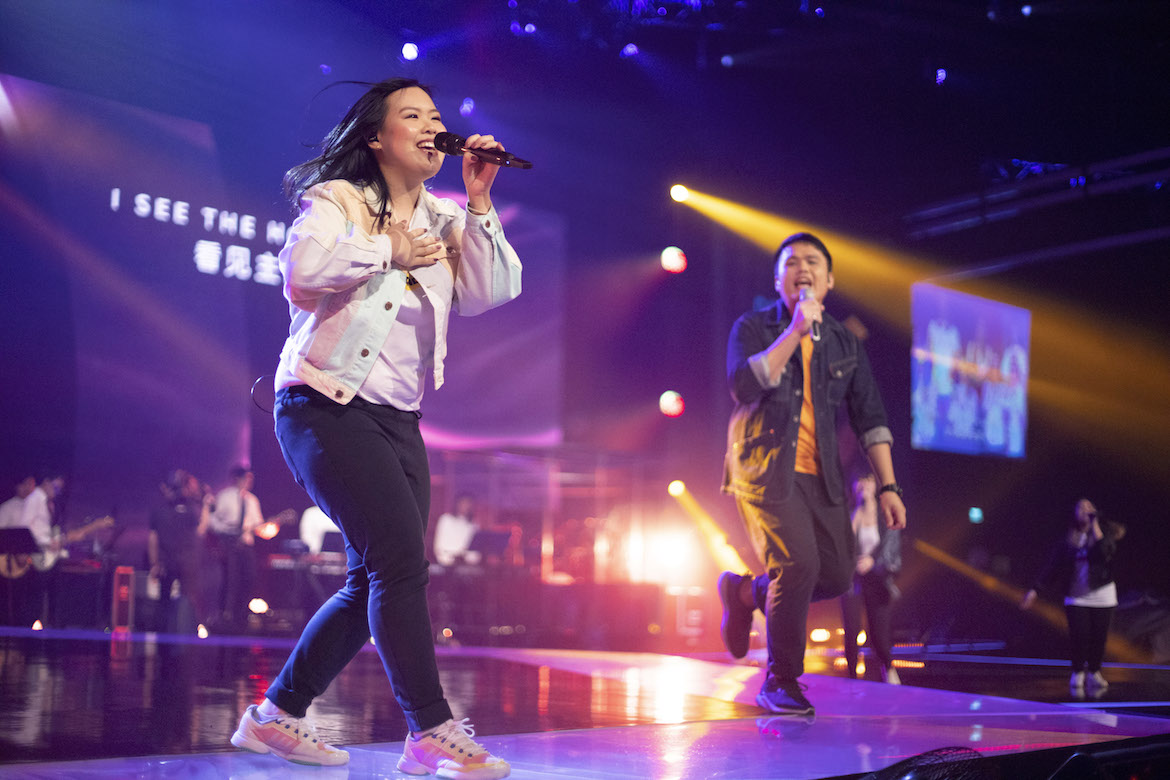 One of the highlights of the SOT graduation service were the students’ testimonies of how SOT had deepened their walk with God. This year, a whole team went on stage to tell of the goodness of God: Team 6 took the stage, with team leaders Theresa Tan and Angelina Lim sharing their testimony.

The team leaders shared how SOT was challenging for most of the team members, as most of them were aged well above 40. But worshiping God every morning and learning the deep things of God gave them new strength every day. The team experienced miracles in family salvation, business breakthroughs and healing miracles. One of the team members, Elida was diagnosed with pre-cancer in the womb. During SOT, she kept praying and by June, she was totally healed and declared cancer-free by her doctor. 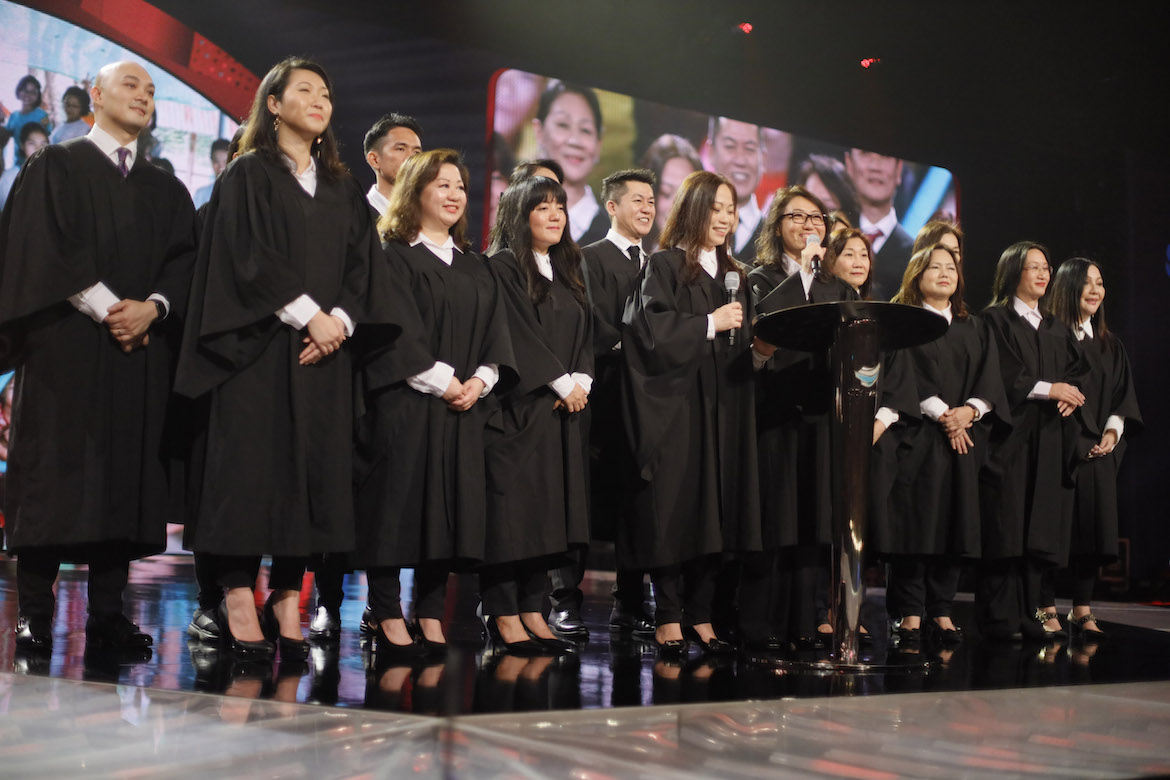 The highlight of their SOT journey was the mission trip to Myanmar where they prayed for the sick, held evangelistic meetings and marriage seminars, and even cooked curry chicken for 200 people. The team saw God healing the sick and broken, and bringing many to salvation. The move of God was an experience hard to forget.

David Nguyen from Vietnam delivered a seven-minute sermon on the call for transformation. Reading from Mark 5:1-20, David told his fellow students that since God has transformed their lives in SOT, it was now time to testify about the goodness of God in their lives. 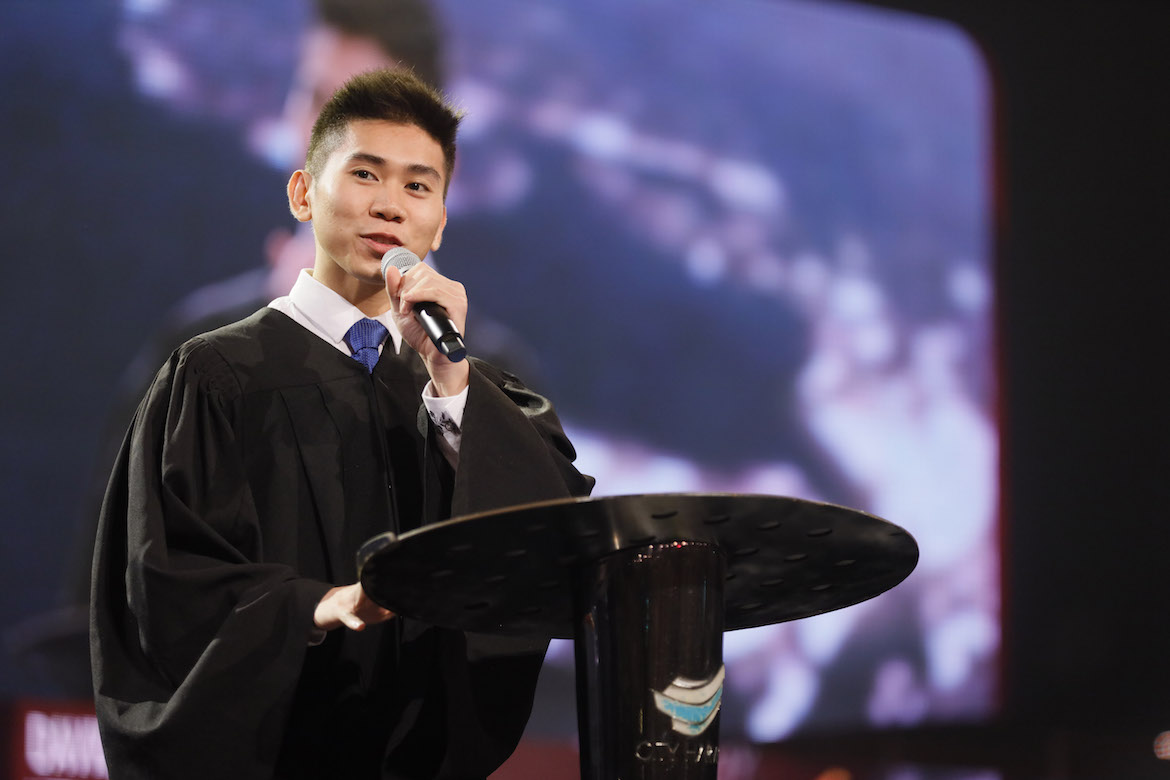 He encouraged them that God does not call the qualified, but qualifies the called. Using the examples of Moses and other heroes of faith, David preached that many great men of God are not qualified for the job, but God could use them to His glory. Most importantly, they had to respond when God calls. In closing, he encouraged the graduating class to set a kingdom priority, to share their testimony in order to transform the world.

On Sunday, Jabez Tan Jia Liang from Johor Bahru, Malaysia, shared a message in Mandarin, on the power that changes the world.

“Today’s our graduation, many will wonder what is our next step. The Bible tells us that the Holy Spirit will guide us!” he encouraged.

Quoting Luke 4:1 and Acts 16:6, Jabez preached that the Holy Spirit guided Jesus and the apostle Paul when they first started their ministry. Jabez himself experienced this when the Holy Spirit led him to SOT after he was appointed a youth leader in his church. In SOT, not only did he learn practical leadership skills, he also received the anointing to lead the youths. 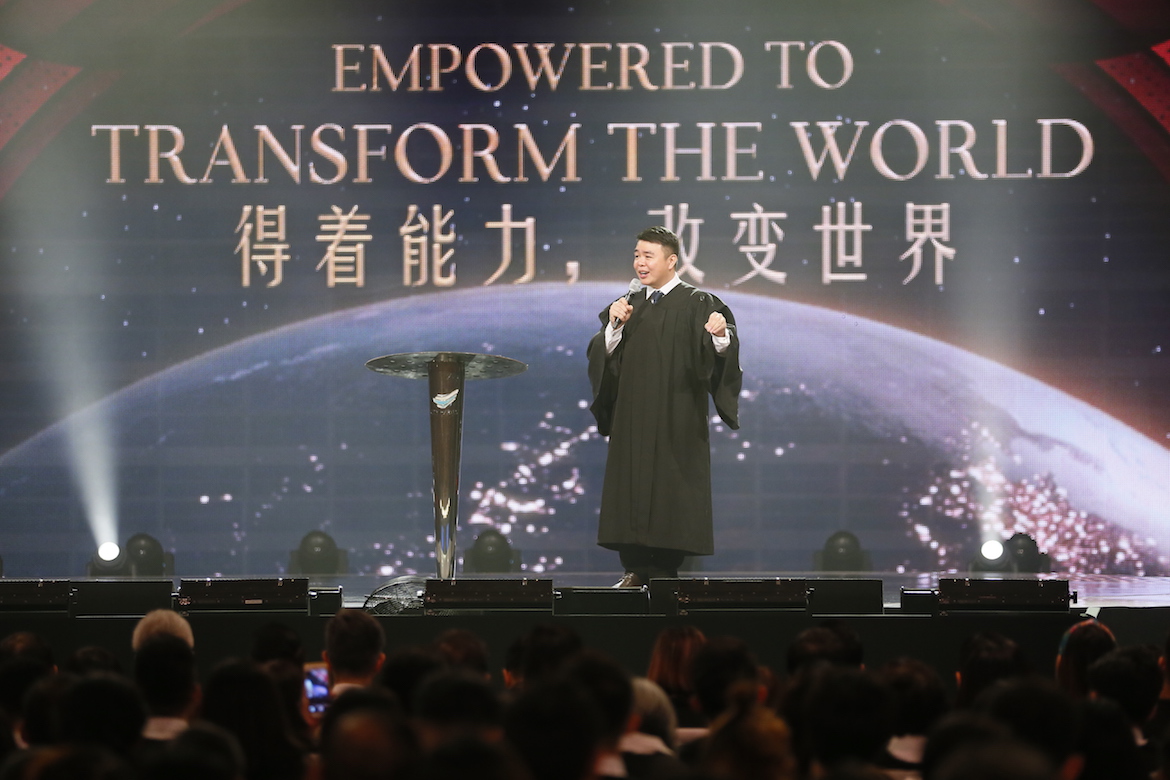 “When the Holy Spirit is upon us, He will give us power,” he preached. In Acts 1:8, Jesus told the disciples that the power of the Holy Spirit was given so that they can “be witnesses to Me in Jerusalem, and in all Judea and Samaria, and to the end of the earth.”

In conclusion, he encouraged the graduating class to change the world for Jesus. By the power of the Holy Spirit, they can bring light into every darkness, order into chaos, freedom to the oppressed, and resurrection to the dead.

On Sunday, Chua Kik Chon (KC), the senior pastor of Tabernacle of God in Malaysia, then shared his journey of building the church and how he came to SOT. 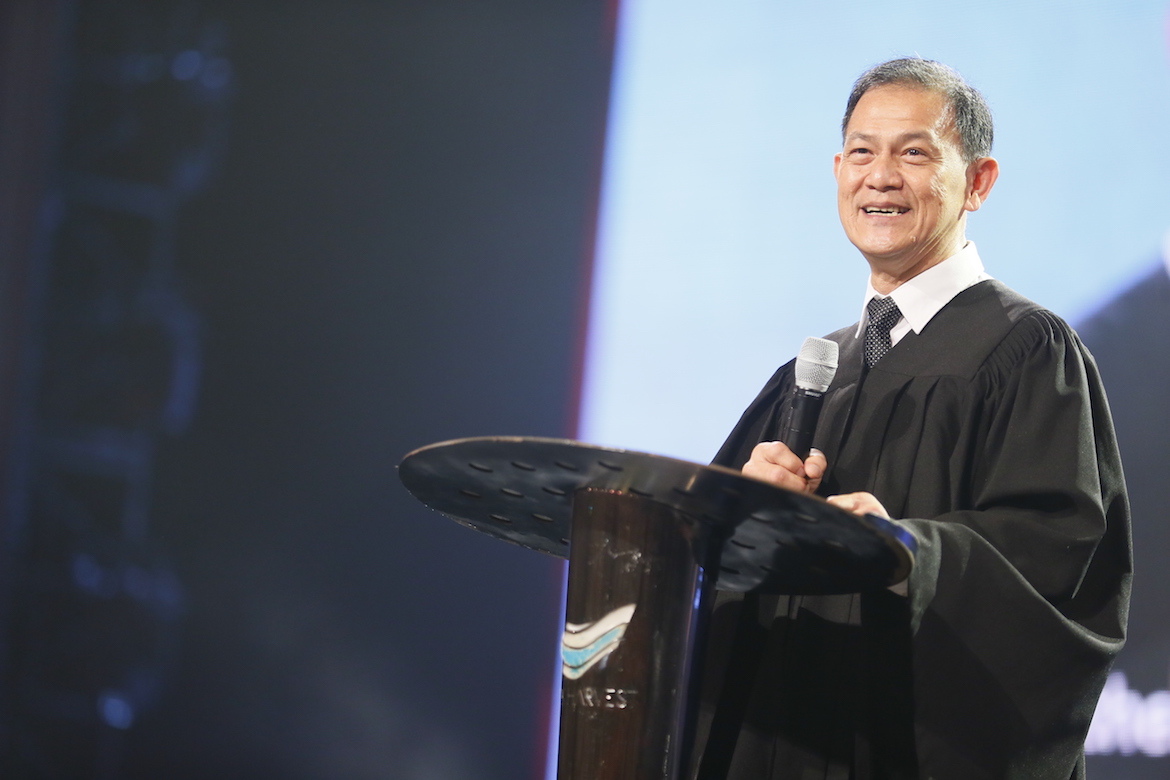 He was a businessman when God called him to start a church in the small town, Batu Pahat. With no experience or training, Pastor KC could only imitate what other churches did but that did not help his church to grow. After four years, he decided to stop wandering aimlessly and told God the church needed help.

His son, YK, who was helping him in the ministry, had been going around learning from different ministries. He learned about CHC online. In 2015, a missions team from SOT went to serve at Tabernacle of God Church and that was their first point of contact with CHC.

Deferring his university education, YK enrolled into SOT in 2016. After graduation, he applied all the principles he had learned at SOT, to his home church, transforming their ministries and home cell groups. He even taught the members to play musical instruments and started a worship band. He also started giving the cell group leaders Bible study and prayed regularly together with them. From 30 members under two years ago, the church has grown to 80 regular members today—a rare thing in Batu Pahat.

All this inspired Pastor KC to enrol into SOT this year. For the sake of growing his church, he took a step of faith, setting aside his concerns about his language skills. In SOT, he saw the commitment to God that CHC members possess, and he learned how to seek God wholeheartedly. His vision now is to make more disciples for Jesus.

THE HOPE OF GLORY

Pastor Bobby Chaw, executive pastor at CHC and the principal of SOT encouraged and empowered the graduating class with a message on hope as they embarked on their next journey. He shared how each believer needs to live their lives in earnest expectation of God.

“What awaits us in the future?” Pastor Bobby said, voicing out the thoughts of many graduating students. “When Jesus sent out His disciples on their ministry journey, He told them, ‘The harvest is plentiful, but the workers are few.’” (Luke 10:2)

But in the midst of the harvest, Jesus also warned His disciples about the reality of this world in verse 3, “Go! I am sending you out like lambs among wolves.”

“Opportunities always come with oppositions. As you seek to obey and serve the Lord, there will be difficulties, trials and troubles,” preached Pastor Bobby. Yet, a believer should not carry fear, but hope in their hearts as they walk through life.

In Romans 8, Apostle Paul gave vital perspectives and attitudes to believers. It says in verse 18, “For I consider that the sufferings of this present time are not worthy to be compared with the glory which shall be revealed in us.” This is the principal of life. Those who sow in tears today will reap in joy tomorrow. 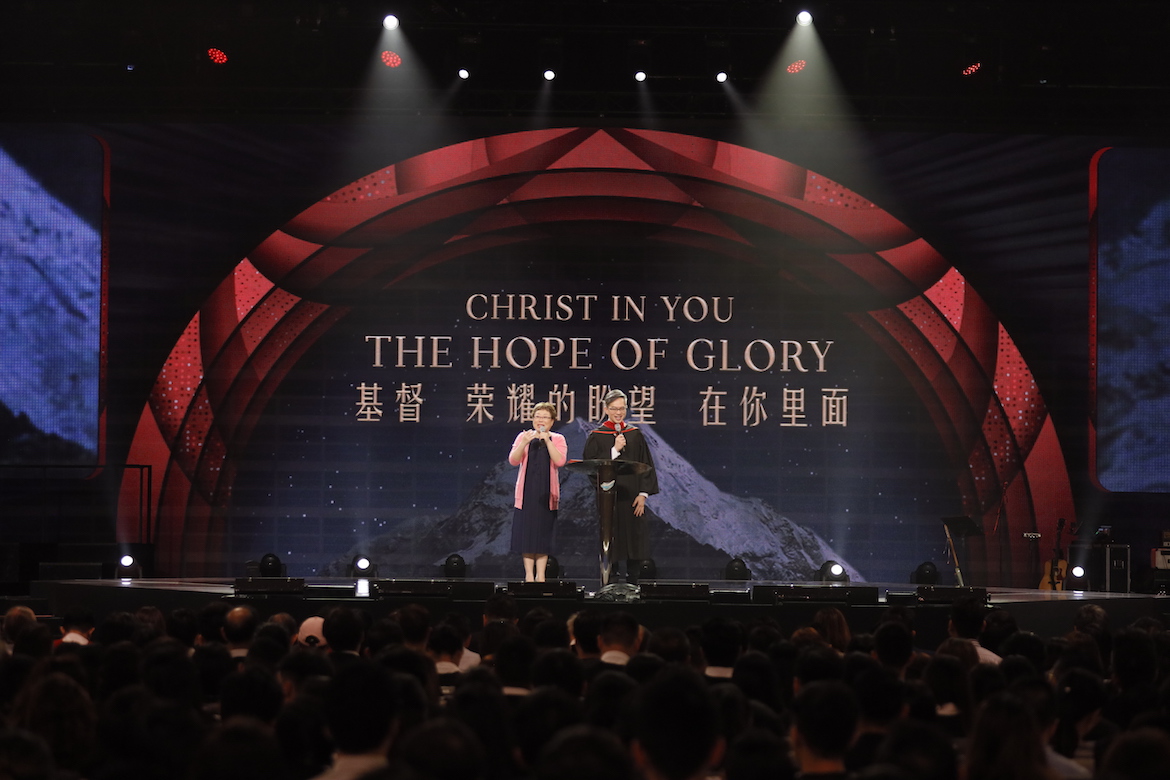 “Present suffering, future glory—this is the principle of life” shared Pastor Bobby. He goes on to share that as Christians go towards the future, they must carry the attitude of earnest expectation.

In Romans 8:19 it says, “For the earnest expectation of the creation eagerly waits for the revealing of the sons of God.” Explaining with the Greek word, apokaradokia, Pastor Bobby depicted how a Christian who is awaiting his future should wait with expectation, with his head raised and his eyes fixed over the horizon.

Pastor Bobby went on to share what believers need as they await their future glory, drawing from Romans 8:22, “For we know that the whole creation groans and labours with birth pangs together until now.”

“Earnest expectation has a groaning in prayer. It is not a groaning of hopelessness, but a groaning of birth pangs,” the pastor described. Likened to a pregnant mother delivering her baby, intense pain a believer experiences is followed by great joy of a new life. He then encouraged the church to not give up in their prayers even in difficult times.

“What saves us from despair is hope,” Pastor Bobby told the congregation. Romans 8:24 says, “For we were saved in this hope, but hope that is seen is not hope; for why does one still hope for what he sees?” Hope in God’s promises and faithfulness is what gives Christians the strength to go through trials and tribulations, he pointed out.

He shared the testimony of Aiden Ho, a member of CHC from Johor Bahru and an SOT student this year. Aiden first came to CHC in 2016. In December that year, he was diagnosed with stage three nose cancer. Since then, together with his wife and cell group, they have been praying for healing. Yet after a few rounds of ineffective treatment, Aiden’s condition grew worse and the cancer cells began spreading. In April 2018, the unthinkable happened, and his 3-year-old son passed away due to a suspected lung infection.

Aiden’s whole world collapsed—the pain was unbearable. Aiden cried out to God asking where He is and if there is any hope for his own future. During this dark season, his cell group rallied around him and kept believing that healing will come upon Aiden. In October 2018, Aiden went for a PET scan only to find out that the cancer had spread to 12 different locations in his body; his doctor told him he only had two months to live. 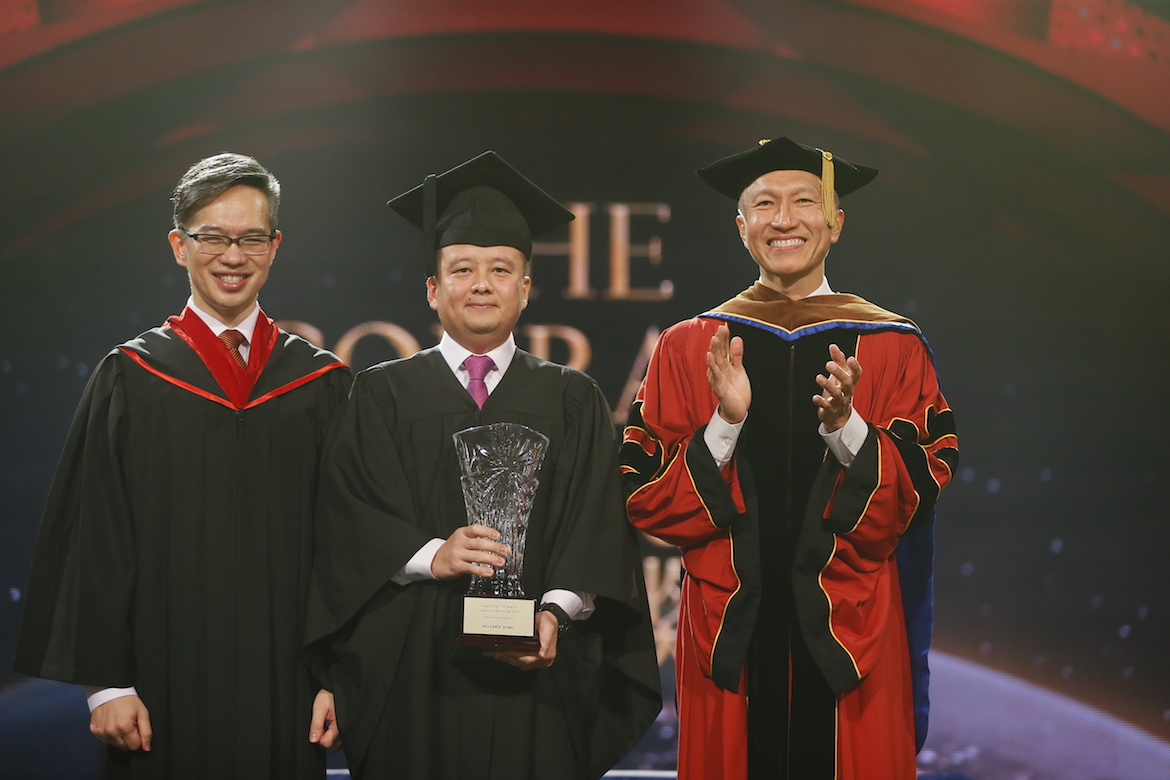 Aiden did not give up hope. In his heart, he believed that God is good and that he would be healed. Instead of losing hope, he enrolled into SOT this year. For seven months, he had to go for frequent cancer treatments, but nonetheless, managed to finish all his assignments and pass all his exams and preaching tests. He even went on three mission trips even though the curriculum only called for one.

In July 2019, Aiden’s father, who was not a believer, was touched by Aiden’s testimony and gave his heart to Jesus. Aiden graduated with the rest of his class this past weekend; still alive and shining for Jesus. His latest scans showed that all the 12 tumors had either been terminated or had shrunk. Aiden is a testimony of God’s goodness.

In closing, Pastor Bobby read from Romans 8:37, encouraging the church that even when they are faithless and lose their grip on Jesus, He will never let them go. Though every believer will endure present suffering, they can also do so because of the future glory that lies ahead because every believer has “Christ in you, the hope of glory.”

The service ended gloriously with a special segment featuring alumni from SOT’s 25 years forming a choir to lead the church in the anthem for SOT: “In Christ Alone”, before the Class of 2019 took the stage to join in the song and throw their mortar boards up in the air in celebration of a year well-finished. 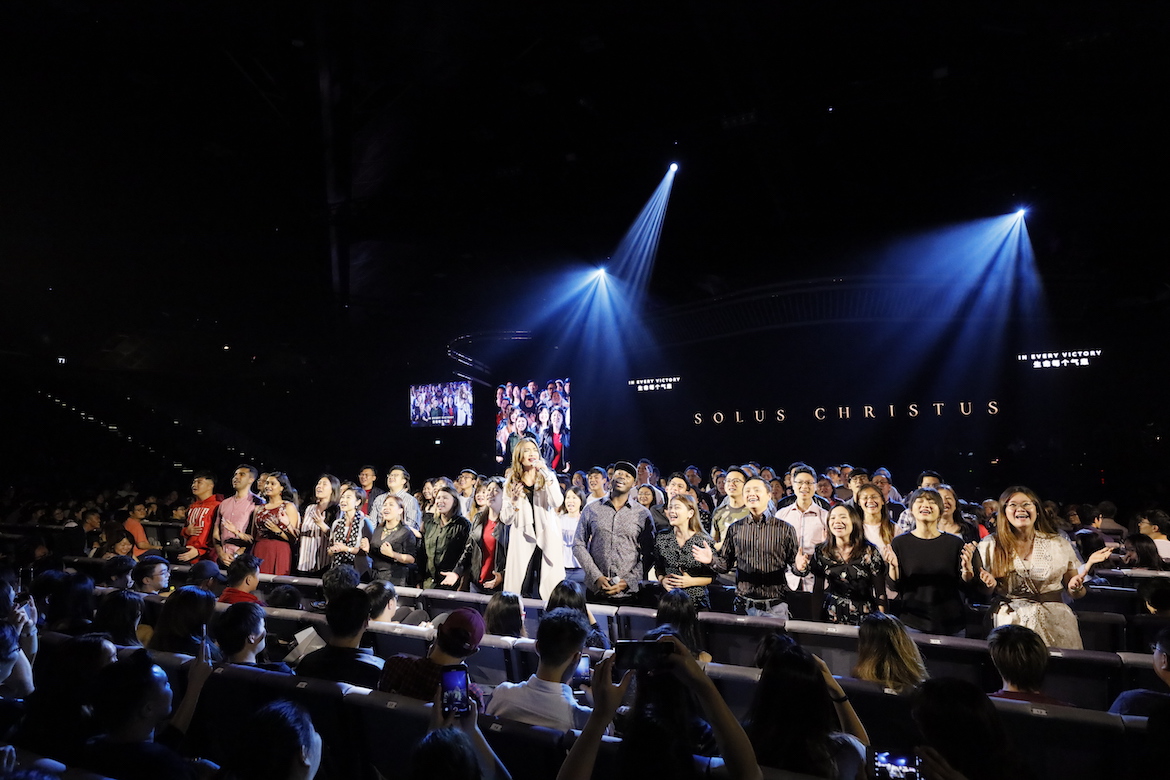 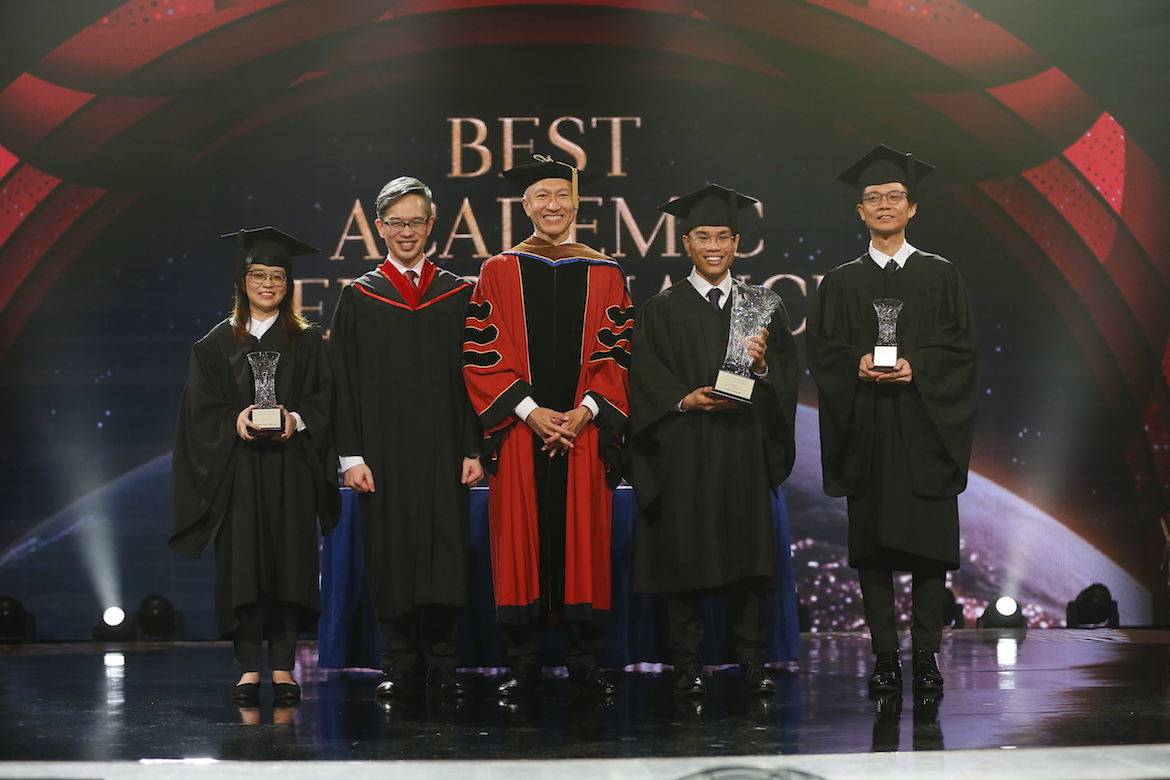 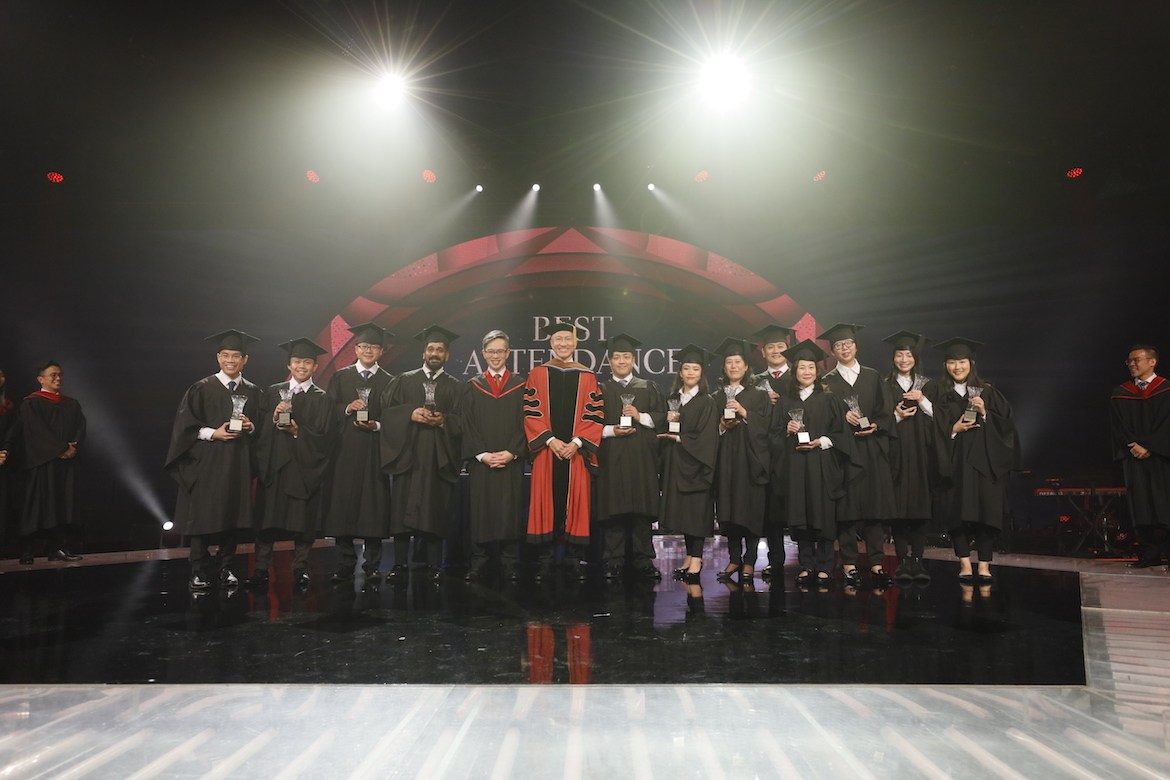 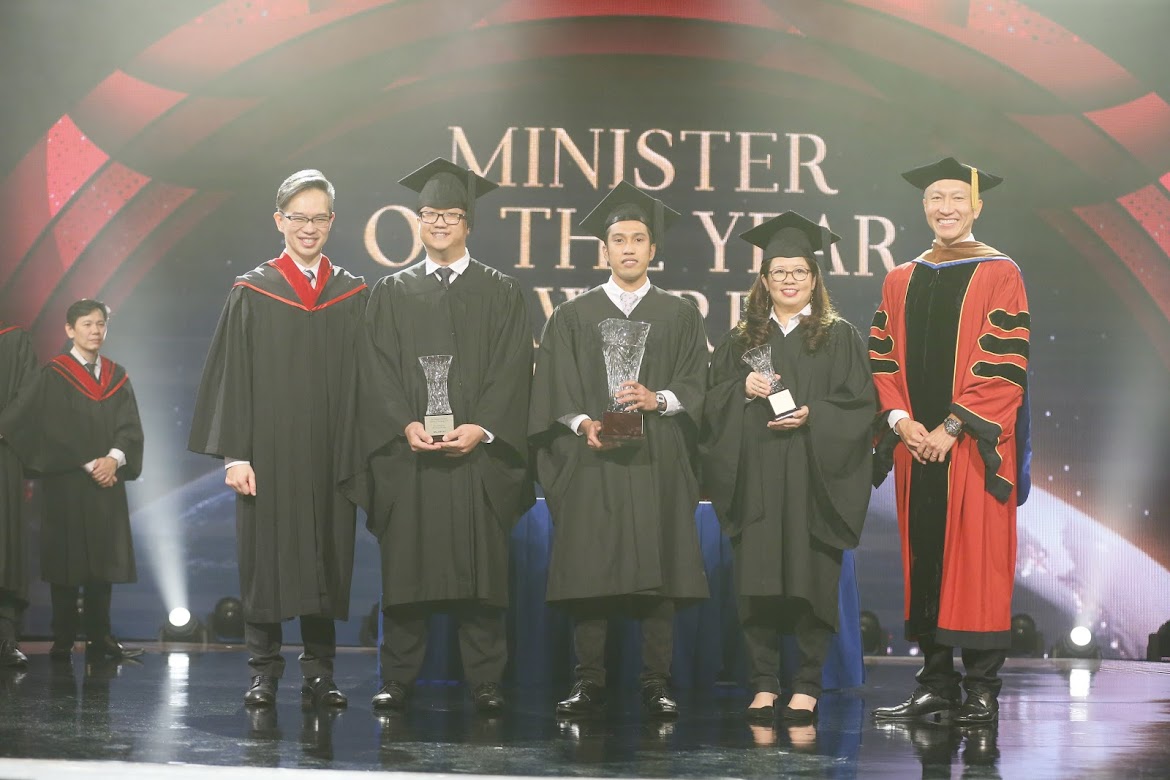 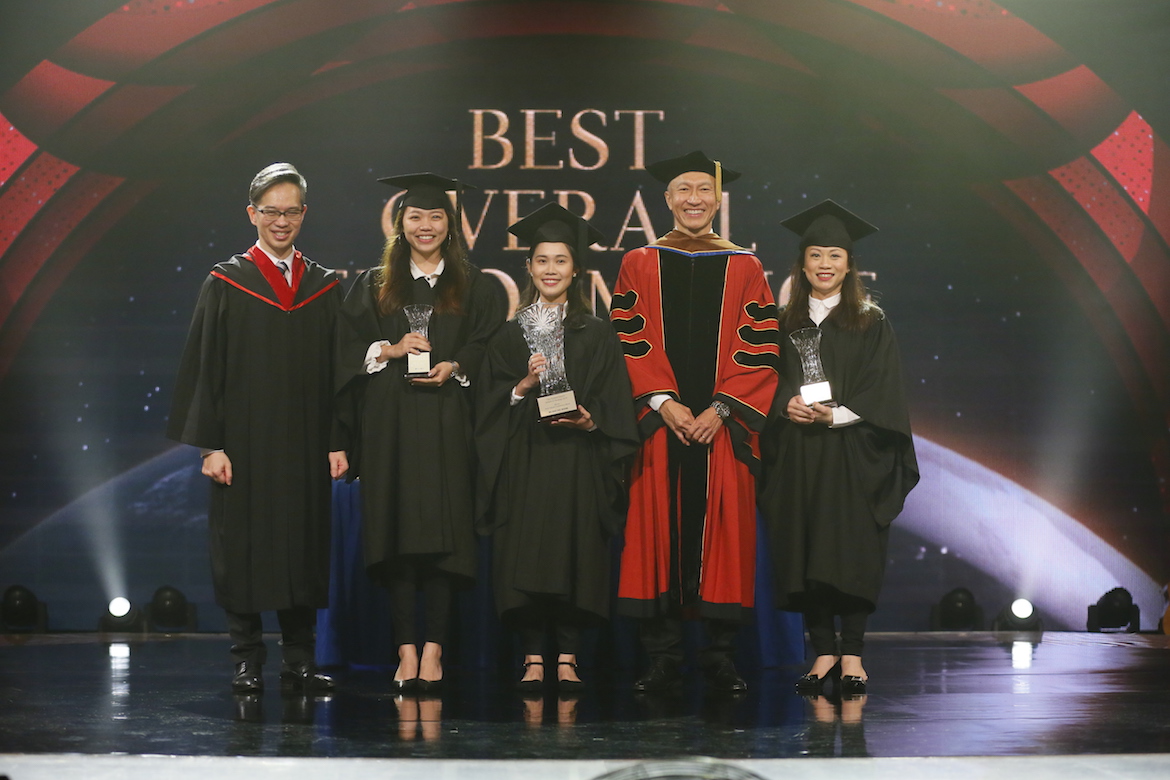