Knowing how to sense and response to the move of God is important in Christian living. Pastor Choong Tsih Ming preached a rousing message to City Harvest Church last weekend, encouraging them to position themselves for the ninth hour. The first message of the second half of 2019 was one with a call of action. On the weekend of July 6-7, Pastor Choong Tsih Ming preached on the significance of the ninth hour and how Christians should position themselves to part of what God is doing in this season.

Referencing the “sons of Issachar” in 1 Chronicles 12:32, he impressed upon the congregation the importance of recognizing the sign of the times and knowing the direction one should take. Such discerning and wisdom allow a believer to see where God has placed him in the kingdom of heaven.

“[The sons of Issachar] knew how to sense and respond to God’s presence moving on earth,” said Pastor Ming. He added that in the 21st century, youths are overwhelmed with options and decisions that leave many them confused and stressed out.

Hence, the full extent of the question Christians have to ask themselves today is, “What is the nature of the world I’m living in?”

Pastor Ming explained that Christians need to know how to live a life of meaning, impact and influence for the cause of Jesus Christ. More importantly, the church needs to know how to takes its place in the vanguard of cultural engagement and fulfill its missionary duties.

A PROPHETIC SEASON
British evangelist Smith Wigglesworth prophesied that 110 years after the outpouring of Azusa Street in 1915, there will come an even greater revival, one that would have impact on a worldwide scale, where globally, people are hungry for the move of God.

The late preacher Bob Jones also gave a prophetic word, sharing the three signs that would take place before the arrival of the “Billion Soul Harvest”. This revival will see many young people coming to God.

In 1983, Jones prophesied three things: the invention of a morning-after pill, the legalisation of same-sex marriage in America, and that a watch would be invented that labourers working in the rice paddies in China could wear and listen to worship music. With the invention of the Apple Watch, all three signs have been fulfilled.

“There will be a great move of the Holy Spirit with signs, wonders and miracles, working hand in hand, with a great harvest of souls,” declared Pastor Ming.

CHC: OUT OF SURVIVAL INTO REVIVAL
As the church celebrates its 30th anniversary later this year, the pastor prompted the congregation to ask themselves, “What does the Lord want us to know?”

He said that the Lord wants to connect His people to His heart, His plan, and His purposes on the earth.

“God wants to move us from survival to revival,” he declared over CHC.

He emphasized that believers need to become spiritualized in every area of their lives— body, soul and spirit. God wants to bring all these into wholeness, a state known as sozo in Greek.

Revival is for everyone, said Pastor Ming, and it is important to understand the season Christians are living in right now.

THE SIGNIFICANCE OF THE NINTH HOUR
Moving to his main message, Pastor Ming explained the significance of the number nine. 2019 is the 5779th year on the Hebrew timeline. The number nine denotes the end of a cycle and the start of a new one. 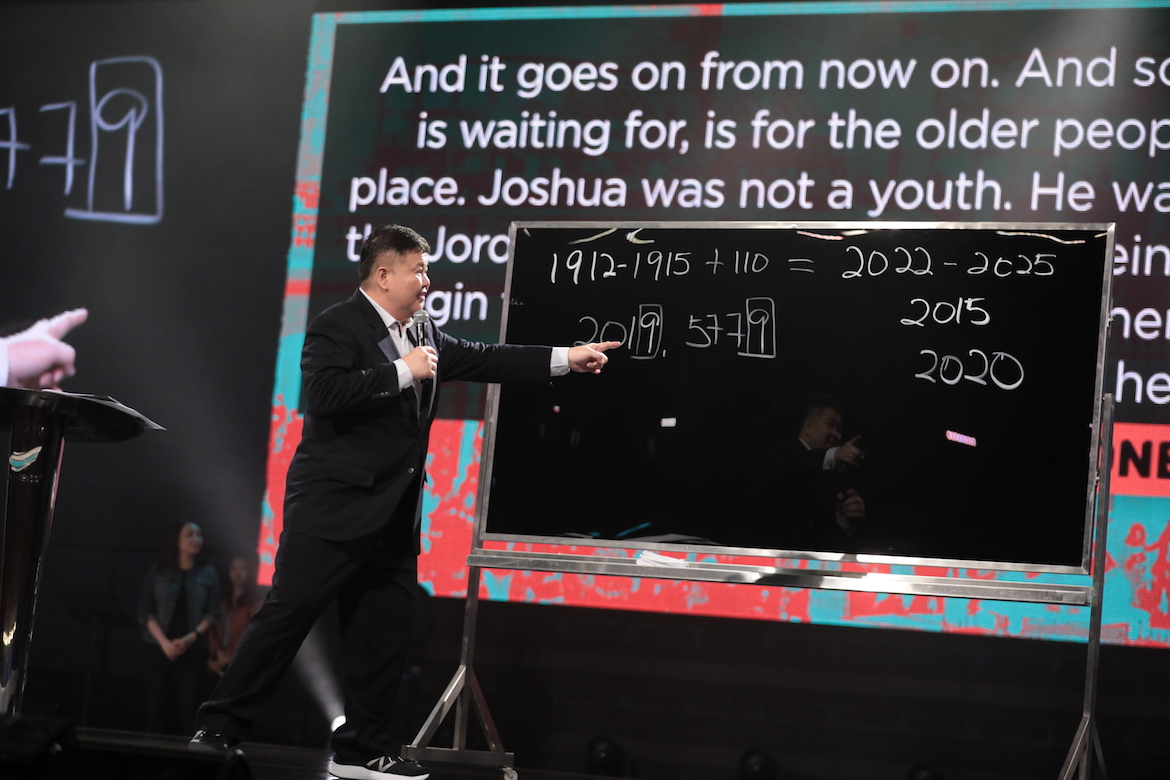 “We are at the end of a cycle, and going into a new one,” Pastor Ming noted.

The ninth letter of the Hebrew alphabet is Tet ט, which is associated with the image of a pregnant woman. In other words, it means to be “expecting”.

The pastor then challenged the congregation, “The Holy Spirit is asking, what are you expecting?”

The number nine is also associated with the idea of sacrifice and prayer.

In the Jewish tradition, the ninth hour is 3pm—nine hours after daybreak— and it marks the evening sacrifice. 3pm is a time where earthly prayers spark a heavenly response.

PRAYERS SPARK A HEAVENLY RESPONSE
In 1 King 18, during a time of drought and a fight against the prophets of Baal, Elijah built an altar and placed a sacrifice on it. He then took the precious water and sacrificed it. This was a demonstration of pure dependency on God. At the ninth hour, God answered from heaven and set fire to consume the sacrifice and all the water around it. After witnessing this supernatural display, the people fell on their faces and returned to God. This illustrated that at the ninth hour, the spiritual drought was broken and revival broke out.

Pastor Ming reminded the people that they are to be distinct and to be able to drive out the darkness; Christians must be the salt and light in this fallen world.

“We influence society and culture when we carry the presence of God with us,” he added.

The most powerful ninth hour recorded in the Bible was when Jesus died on the cross (Matthew 27:45). Jesus was the perfect sacrifice for the sins of all humanity. At the ninth hour, the temple veil was torn as Jesus declared His assignment on earth finished.

In a prophetic pronouncement upon CHC, Pastor Ming declared the end of  the veil of separation, shame, fear, inadequacy, powerlessness and reproach the church members have faced. In the past nine years since the investigations into the church began, everything that could be shaken was shaken. However, he noted, shaking results in revival.

“It is time for us to shift from survival to revival mode. Let us increase our expectation and our prayer focus!” Pastor Ming declared.

THE SACRIFICE
In the Bible, the miracles, deliverance, prophetic voices, angelic visitations and partnerships, and evangelism that happened in the ninth hour were only possible because there was a sacrifice.

While the harvest is mostly the youth, the pioneers of this revival, those who are in their 40s and 50s, must come in now to protect it, finance it, and direct the youths. Calling them “Joshuas” in reference to the leader of the children Israel who was still powerfully doing the work of God in his old age, Pastor Ming further encouraged the pioneers of CHC to get a vision that life does not end at 50, it only begins.

Pastor Ming ended his message by reminding the congregation that the ninth hour always requires a sacrifice. There awaits a miracle, but a sacrifice is needed. Therefore, the first step for Christians to take is to be willing to be a living sacrifice.

“Fire needs fuel to burn,” said Pastor Ming. “Let’s give our lives as a living sacrifice.” He gave an altar call for those who wanted to commit to the vision of the upcoming revival, and on both days, the response of the congregation was overwhelming, filling the area before the altar all the way to the back and up the tiers on Sunday. 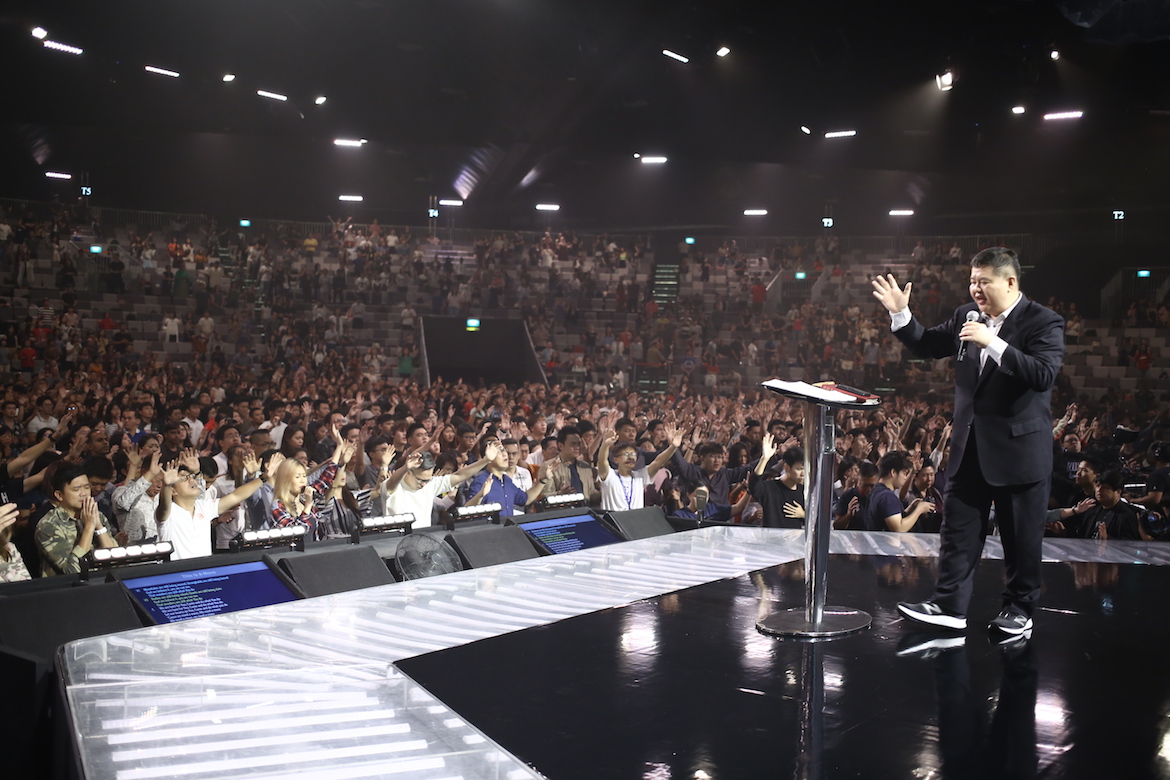