How Well Do You Know The Book Of Mark?

For most believers, the Gospels are their first experience of the Bible. But how well do we really know the Gospels and the meaning behind each miracle and lesson Jesus performed and taught? One CHC zone decided to dig deep, starting with the Book of Mark. 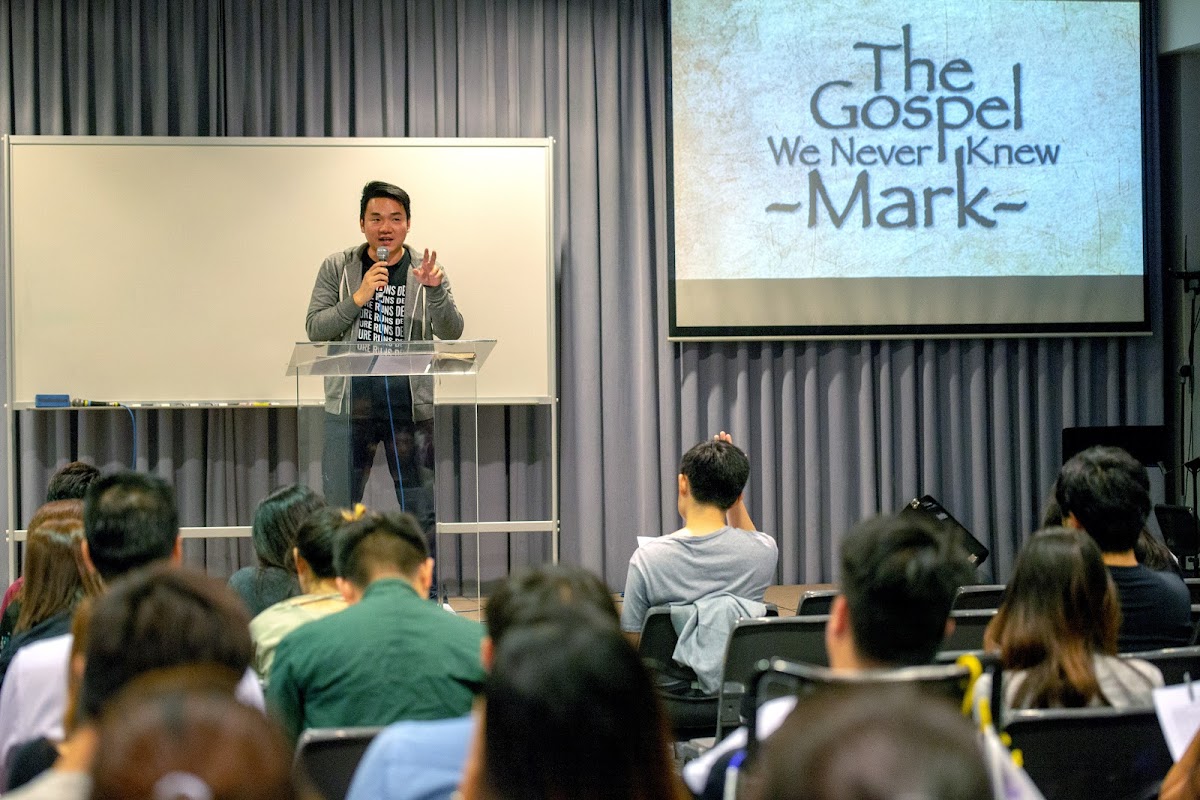 We think we know the Gospels. Sure, we have read them all. Likely more than once.

But have you wondered why Jesus “put His fingers in his ears, and He spat and touched his tongue. Then, looking up to heaven, He sighed, and said to him, ‘Ephphatha’, that is, ‘Be opened.'” in Mark 7:33-34? Or do you know the significance of Jesus touching a blind man twice before he could see clearly (Mark 8:22-25)?

When one pastoral supervisor in City Harvest Church started studying the Gospels, he found that the more he studied, the more he realized he didn’t actually know the meaning behind the things Jesus said and did.

“I listen to a theologian, NT Wright (Nicholas Thomas Wright) and I attend his online bible study courses,” said Ong Weiren. “In one of his sermons, he said that anyone in the clergy, or full-time ministry, needs to read the Gospel four times a year. So I went on that journey, and the Lord showed me a lot of things in the Gospel that I didn’t know about. I had a lot of thoughts and revelations, and I thought that it’ll be good to teach them to my members.”

THE MARK WE NEVER KNEW
That was how Weiren came to teach the Gospels, beginning with the book of Mark on Jan 23 at CHC’s Jurong West campus.  Every Wednesday evening, over 120 members gather to study Mark through fresh eyes.

“Sometimes we think a story or a miracle Jesus did means one thing but it actually means something else,” says Weiren. “There are so many hidden meanings behind the things Jesus taught and said that we never knew.”

What Jesus did in Mark 7:31 to 37 was uncommon. “Jesus’ healing was usually very straightforward. Sometimes He used words and sometimes He touched the person. The most common words He used are ‘Be healed’, ‘Stand up’ and then He’d touch the person.”

But when He healed the deaf and mute man in Mark 7, he did three unusual things before He opened up the man’s hearing and speaking with one word, “Ephphatha”, which means “open up”.

“Firstly, he put his fingers into this man’s ears,” Weiren pointed out. “Secondly, Jesus spat into His hand and touch the man’s mouth. Thirdly, Jesus looked up to heaven and sighed.”

What was Jesus doing? The power of healing comes from the words He spoke, so what did the actions mean? Jesus was using sign language to communicate to the man, Weiren explained.

“Fingers in the ears” indicated to the man that Jesus was going to heal his ears. “Touched his mouth” meant “I’m going to heal your speech.” When He looked up to heaven and sighed, He was saying, “God in heaven knows the suffering you go through; He is going to heal you right now.” Then Jesus said, “Be open”, and the man was healed. “This is an example, along with many other examples in the Gospel, that the stories contain deeper meanings that we may not be aware of.” 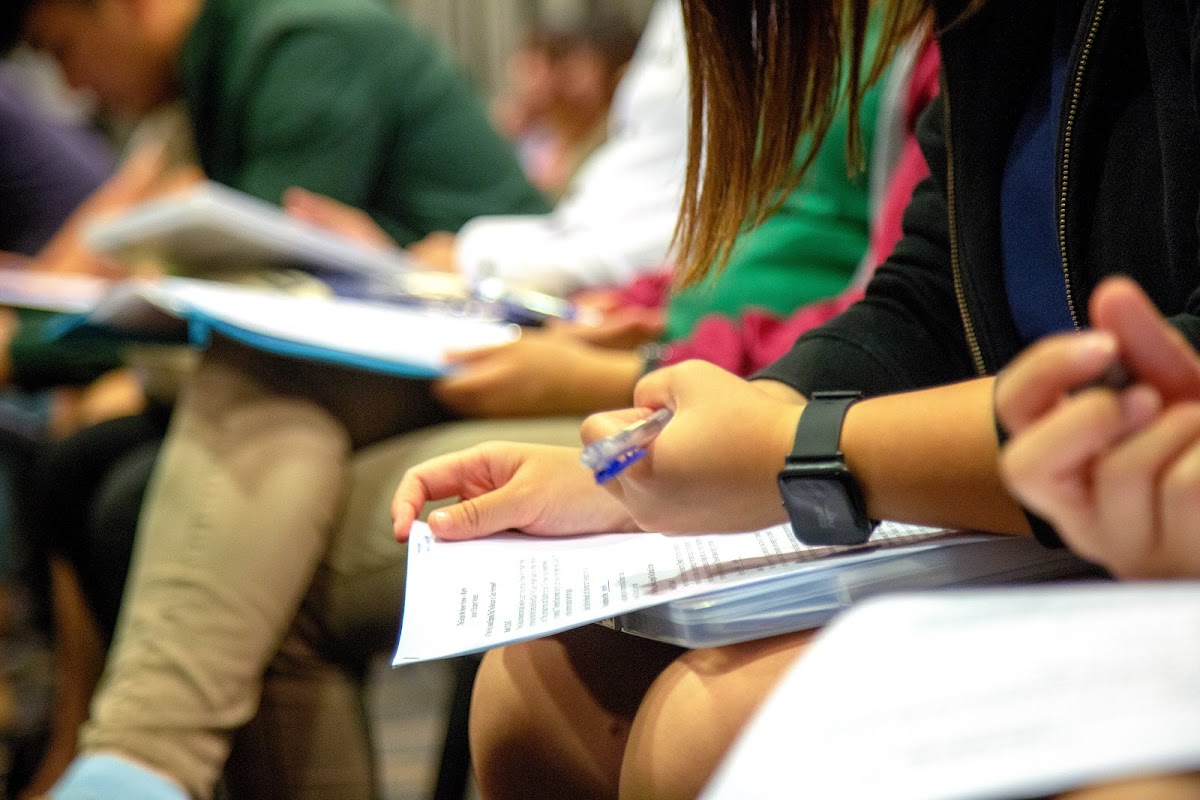 Another example Weiren gave was in the next chapter. When Jesus was healing a blind man, He touched the man twice (Mark 8:22-25).

“Jesus didn’t have to touch the man twice in order to heal him,” Weiren said, adding, “He just has to sneeze and He creates another universe! So when He did it twice, He was sending a message.”

In Mark 8:27, Jesus asked His disciples who men said He was. The disciples replied that some say John the Baptist, some say one of the prophets. Jesus went on to ask, “Who do you say I am?” Peter replied, “You’re the Christ, the Son of God.”

There are two types of vision here: the first one says He is a great prophet, the other say He is Christ the Messiah. This is parallel the two vision the blind man had: at first his vision was blur–that represents the people who see Jesus as the prophet. When Jesus touched him a second time, he saw very clearly–this represents the people who saw Jesus clearly as the Messiah.

WHAT WENT INTO WRITING THE BIBLE STUDY LESSONS
These examples are only a glimpse of the seven-lesson Bible study. Putting together the teaching materials for just 16 chapters of Mark has taken Weiren hundreds of man-hours— just two hours of teaching requires 25 to 30 hours of reading and research.

The real preparation started two years ago when Weiren first started reading the four Gospels every quarter of the year like NT Wright suggested. “I only plucked up the courage to teach after two years,” he admitted.

However, reading the Gospels was just a small part of the preparation. “There was still a lot of study and research I needed to do,” Weiren said, adding that he also needed to be familiar with Acts, Romans and many other epistles in order to teach the Gospels.

The whole process of writing the teaching material started in September last year. The first step to it was an overview of the 16 chapters. Weiren went through each verse of Mark and wrote down his thoughts and revelations for each verse. That made up 120 pages of notes.

“The next thing I did was to chop it up nicely into seven lessons,” he said. “Initially I wanted to do five lessons, but when I started to plan the content, I realized that that wasn’t enough at all.” 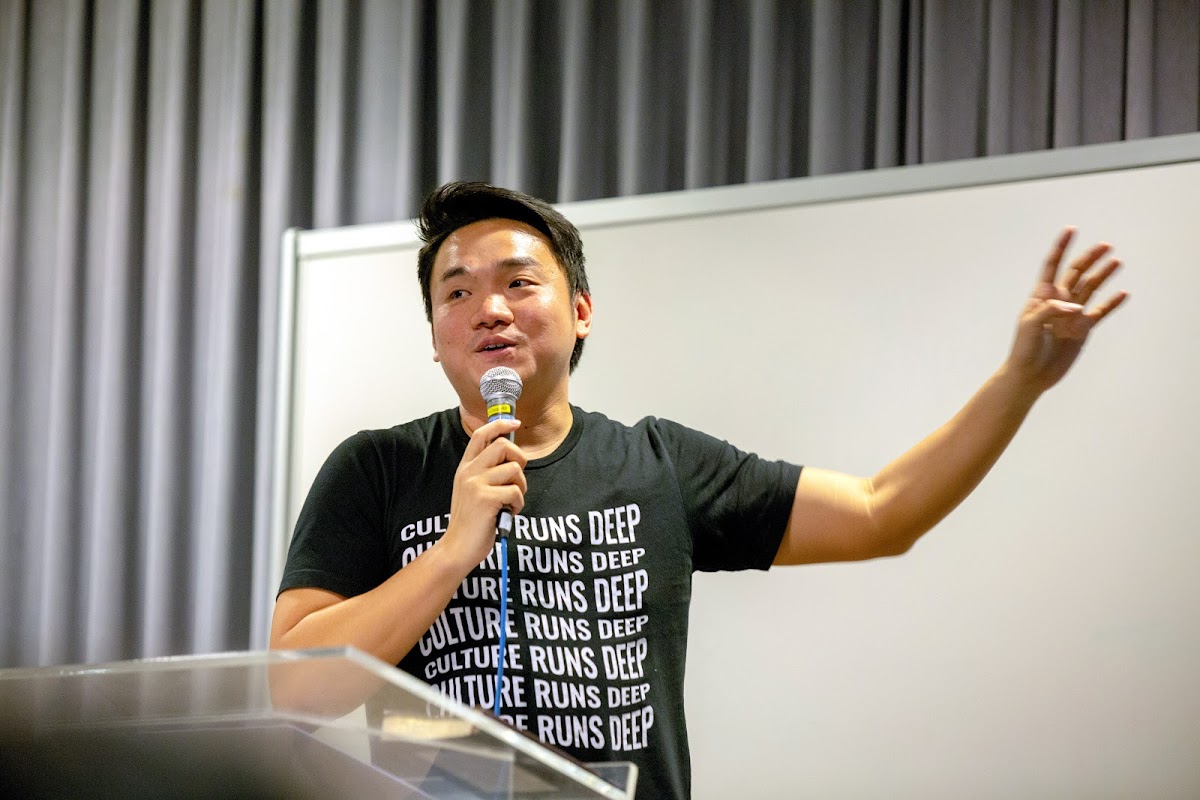 While theology was important, what was more important to Weiren was the practical application of these lessons. “In our church, our cutting edge is that we don’t just teach theology, we also teach the members to apply it in their life,” he pointed out.

When Jesus healed the deaf and mute man in Mark 7, He didn’t just healed him physically, but also emotionally. “At that point, I told the members that we all live a busy life, we rush from place to place and we don’t slow down to listen to a person’s heart. I taught them the importance of fellowship.”

Before each lesson, Weiren would revise the lesson by himself, asking the Holy Spirit to anoint the message. At the same time, he would prepare the presentation slides and student notes. It is very time consuming yet very fruitful, he said.

“When I do the notes and slides, I have the chance to go through the lesson again so it helps me.”

The final teaching on the Book of Mark happens this Wednesday. Ong Weiren will be teaching the Gospel of John starting July 3. Click here to register. 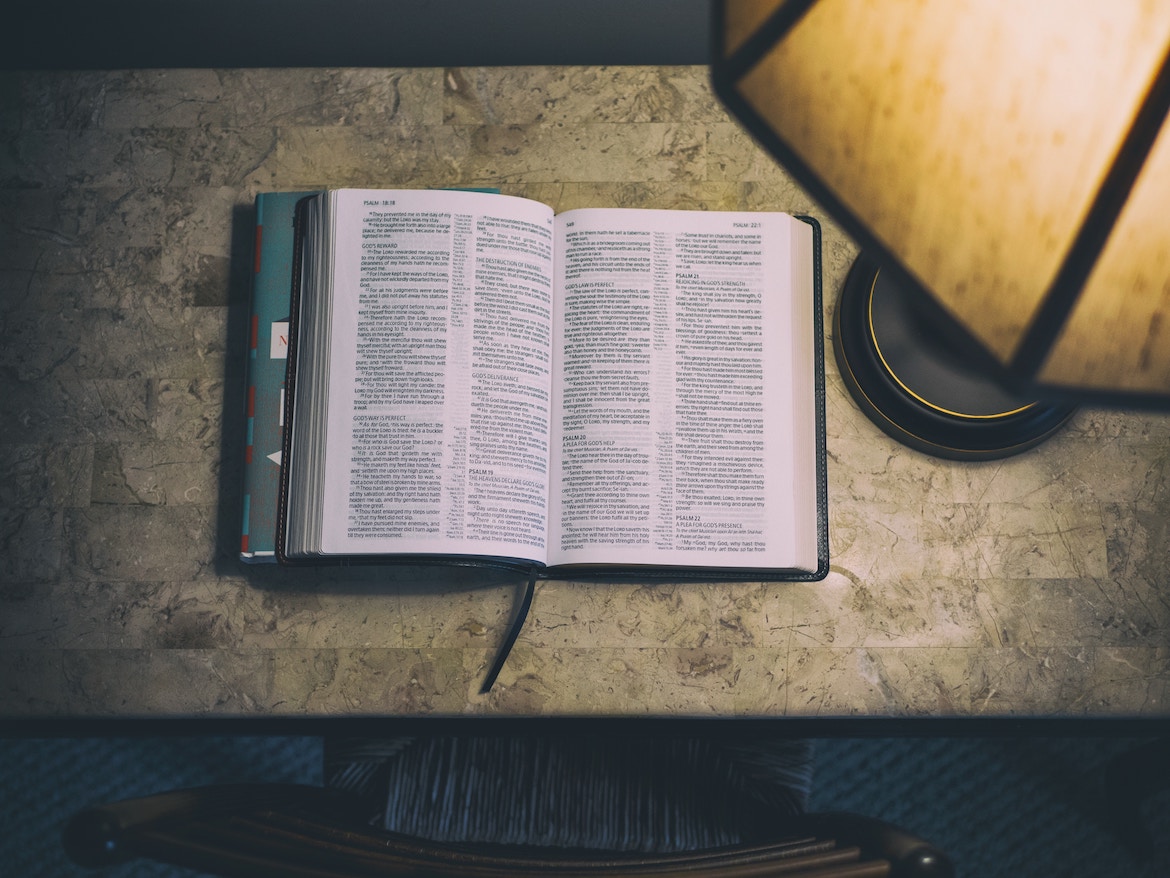 Photo by Aaron Burden on Unsplash

WHAT SPOKE TO ME FROM THE BIBLE STUDY?

Lin Yihan, 35, entrepreneur: “Weiren brings the chapters of Mark to life. When he draws parallels of Jesus’ work with the Old Testament, it just shows that God never does things randomly. Everything Jesus did by the Spirit had a purpose or a message. I was especially wowed when Weiren shared the contrast in Mark 9, how Jesus warned the disciples against causing the little children to stumble. Weiren brought to our attention historical events that happened, which made what Jesus said even more profound.”

Oswin Choo, 23, national serviceman: “The part that spoke to me was the woman with the issue of blood. She had a terrible and sad life–no one was able to touch her because she was unclean. When Jesus healed her, He didn’t just heal her physically but also emotionally. He said “Daughter, your faith has made you well.” This is so beautiful because she was no longer ostracized, she became free. She was now a daughter. Similarly, Jesus wants to heal us totally. He wants to release us into our calling.”

Fiona Wai, 23, social media executive: “I was especially blessed in the second lesson where Weiren shared that the more a Christian studies the Word of God, the more he needs to grow in love. The example he quoted was that knowledge puffs up but love edifies. Knowledge without love would lead to intellectual pride and knowledge with love will lead to humility and sense of obligation. This is a very timely reminder to me as I am in a season where I am very hungry for self-growth. I’m reminded that growing as a person involves growing in love too, more than growing in terms of wisdom and knowledge. I was very blessed!”

Isaiah Chua, 28, PhD student: “The Gospel of Mark Bible study with Weiren gave me a fresh revelation of Jesus as the Messiah. He was not the Messiah that the Jews were expecting—that is, one that was going to bring the kingdom of God through war and violence. Jesus instead demonstrated that the way of the Cross was how the kingdom of God comes into our world. This should change the way we look at our lives; the pain and troubles we experience in life should drive us to pray and contend for the kingdom of God to come into those circumstances. The kingdom of heaven advances through the love and suffering of its citizens.”

Serene Goh, 26, market analyst: “One of my greatest takeaways from this week’s Bible study on the Gospel of Mark is when Weiren said he is in love with the Jesus who knelt down and washed the feet of His disciples. Jesus, the Messiah, chose to display His greatness by way of serving and loving. As a follower of Christ, I want to emulate Christ, to love and to serve. ‘To start drawing circle (be inclusive) and not lines (be divided),’ as Weiren taught.”