The path to becoming a senior pastor is often with ups and downs. Newly- ordained pastor from Hong Kong’s Arise Church Tsui Feng tells of his journey. At the weekend services of November 17 and 18, Tsui Fung, a School of Theology graduate was ordained as the senior pastor of Arise Church, Hong Kong.

“I have been a pastor for a long time, but since I came out of my former church, I had wanted a change,” said the freshly-minted Pastor Tsui after the service. “Pastor Bobby [Chaw, executive pastor of CHC] said that he was not just anointing me as a pastor, but as a senior pastor of Arise Church.

“Actually, it was my members who contacted Pastor Bobby around April, and he called me. I didn’t even think about ordination.”

As it turned out, the ordination marked the end of the valley journey he had been walking the last two years.

HOW HE BECAME COMMITTED TO GOD

Pastor Tsui grew up in Grace Community Church in Hong Kong. He loved to tell people about Jesus and once, he even brought his whole class to church. But to his disappointment, his friends found church boring. “Why do you even continue going to church?” they asked.

His heart left the church with his friends. “I would still go to church but I was living a double life,” he admitted. “I was in a gang: I would get into fights and often I would not return home at night.”

Things got serious when the police showed up at his school one day. “When I came out of class, a few plainclothes policemen took us to a room and told us they had received complaints that we were in a gang. They wanted us to tell them who our boss is.”

Pastor Tsui, then just 13 years old, became worried. “That meant that our parents would be notified; the school already knew so I might not even be able to study anymore. If things got more serious, I might even have had to go to a boys’ home.”

In that room, he became serious with God for the first time. “I prayed and asked for His help. The police wanted information on the gang and wanted us to be witnesses in court,” he said.

He lived in fear for the next four months leading up to the court dates. But a miracle happened on the day he and his friends were to appear in court. “We were told that there was no need to because the guy had confessed,” he said.

God’s grace didn’t end there. “There were four of us. The school expelled the other three but they gave me an opportunity to study in the top class the next year. I was very amazed. Nobody said anything about the incident and there was no record of any kind,” he recalled. “I think that was God’s grace and so I told myself, I cannot continue on my old path, I need to go back to church and grow in God. After that, I brought all my good friends to church and we all eventually joined the church as full-time staff.” 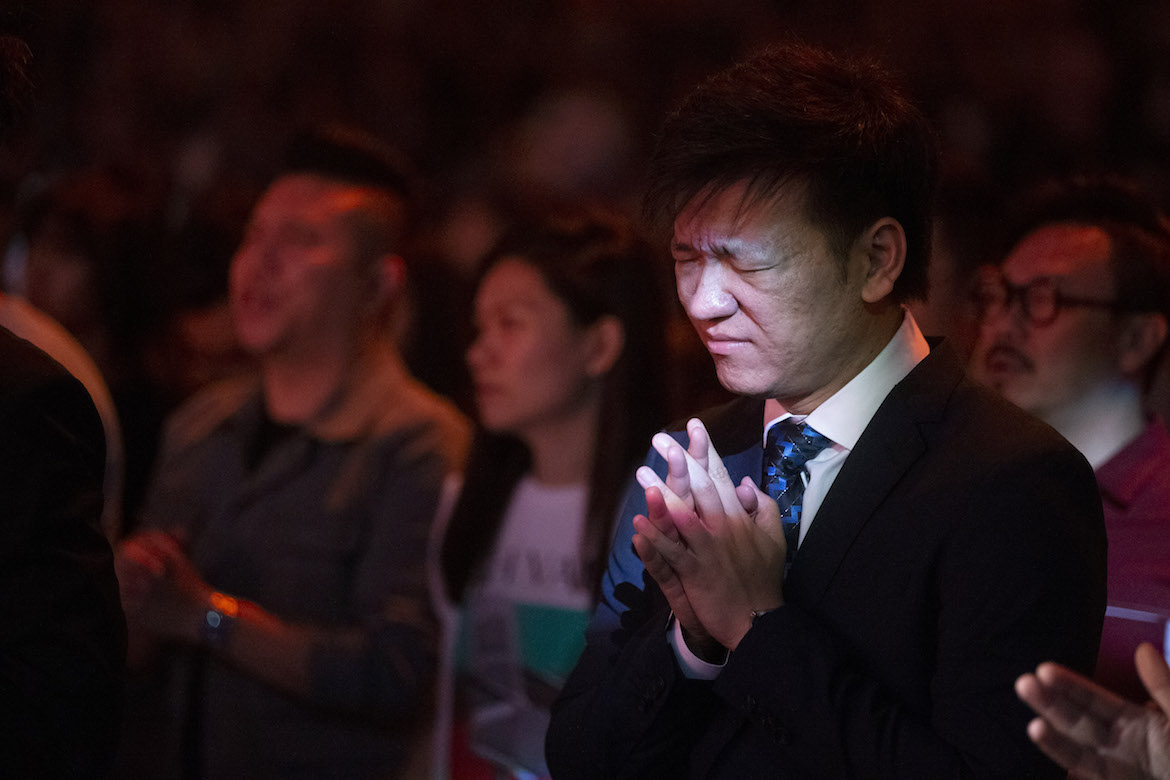 HOW HE BECAME A FULL-TIME MINISTER

Pastor Tsui began working in church as a pastoral worker in 2000. In 2002, Sun Ho held a concert in Hong Kong and Grace Community Church was one of the organizers. “My church was in charge of ushering and I was one of the ushers. That was the first time I came into close contact with CHC.”

That concert showed Pastor Tsui and his team what they could do to win the young people. “It gave us a lot of encouragement and we want to do believe that our church can do the same,” he said.

From that point, they developed a burden for the youth and the passion to reach out to them. “The interesting thing is, we didn’t change anything or go for any training,” he noted. “We just followed CHC’s way of doing things and prayed that God would give us creativity. We were really quite creative then: we held a lot of special concerts and camps that churches in Hong Kong won’t usually do. We want to bring pop culture into church.”

The team also knocked on the doors of schools. “We did campus ministry from 2005 to 2009,” he said. “I felt more like a student than a church worker in those days. I was in school from Monday to Thursday!”

Getting the schools to open their doors was not an easy task. He remembered, “There were a lot of Christian schools in Hong Kong but most of them already belonged to a denomination. We knocked on the doors of around 100 schools, and only four responded.”

Pastor Tsui and his team would bring the Gospel to the students through creative games, praise and worship, and the sharing of Scripture.

All these efforts brought many to Christ. “We grew by almost 100 new members every year,” he said. “At the peak of our ministry, we had 1,200 youths representing 140 schools. In those few years, revival didn’t just come to our church, but the whole city of Tsuen Wan saw a change. The Hong Kong police reported that the crime rate among the youth there dropped significantly.” At one church gathering, a police superintendent even attributed the change to their church’s effort in reaching out to the students.

In 2009, Pastor Tsui came to Singapore to attend SOT. “Those two years were the turning point for me, spiritually.”

In the midst of his SOT year, he proposed to his then-girlfriend, Helen, and they were married three months after he graduated. “The interesting thing is, a few months after we got married, my wife felt led to go to SOT. The next year, she came to Singapore to attend SOT for seven months and her life was totally transformed. Both of us would agree that CHC and SOT are the places that really helped us to grow.”

HOW HE WALKED THROUGH A VALLEY

“Things had gone very well when I was in Grace Community Church,” he admitted. “That was the period of time when God showed me His power and grace. But after I left in 2015 and started Arise Church in 2016, I started experiencing difficulties.”

Arise Church was started with just 10 people. “We were carrying a lot of hurts at that time. I never thought I’d leave Grace, I wanted to serve God there till the day I died. So, I struggled for a long time, and asked myself, ‘Should we really start a church?’”

Before he founded Arise Church, two other churches approached him to join them as a full-time minister. One of these was the fastest-growing church in Hong Kong at that time. “If I had wanted a comfortable life, I should have gone to a big church,” the pastor said honestly. “To start a church, we needed a venue. The rental in Hong Kong is super expensive and we couldn’t afford it.”

On top of that, he had to think about what it meant for his family financially. “And I’ve been serving God full-time for 18 years,” he said “I wanted to rest. But then, I felt like I needed to do this.”

The challenges came in many forms. Finances were tight both at home and in church. Emotionally, he had to deal with the hurts of leaving his members back in his former church.

“The people we left behind at Grace felt that we had abandoned and betrayed them,” he said. “But because we didn’t want it to affect the church when we left so we didn’t say anything. We didn’t explain ourselves.”

The greatest challenge Pastor Tsui faced was the nagging thought that the decision to start a church might have been a wrong one. For two years, he struggled with these uncertainties alone. On the outside, everything seems fine. Arise Church was growing; they were sending members to SOT every year. But in truth, there was no breakthrough in the spiritual atmosphere.

HOW HE EMERGED VICTORIOUS

The breakthrough came when the Holy Spirit spoke to Pastor Tsui early this year.

“The Holy Spirit told me to open up to my members and tell them about my burden,” he recalled. “After sharing with them, the whole atmosphere changed. I told them I almost wanted to give up, but I told them that the Holy Spirit wants us to raise up again and all of us came together to pray,” he said.

“I feel that the change came because I was willing to be open to the members. In the past, when I was overseeing over a thousand people, I felt that I was above them and can’t share things with them honestly. So this is a milestone for me. Jesus told me, you are 40 years old; Moses also spent 40 years in the desert. If God didn’t bring Moses to the wilderness, he would still have been a prince. When I say ‘prince’, I mean he would have been egotistic. I’m like that too. I think God wanted me to bring me out to the wilderness, to go through a low season in my life, to tell me that I can’t continue that way. I need to be honest and open with my members or it would become a problem when the church grows.

“After that, Pastor Bobby told me that he wanted to anoint me as a senior pastor,” said Pastor Tsui. “All of these things happened at the same time.” 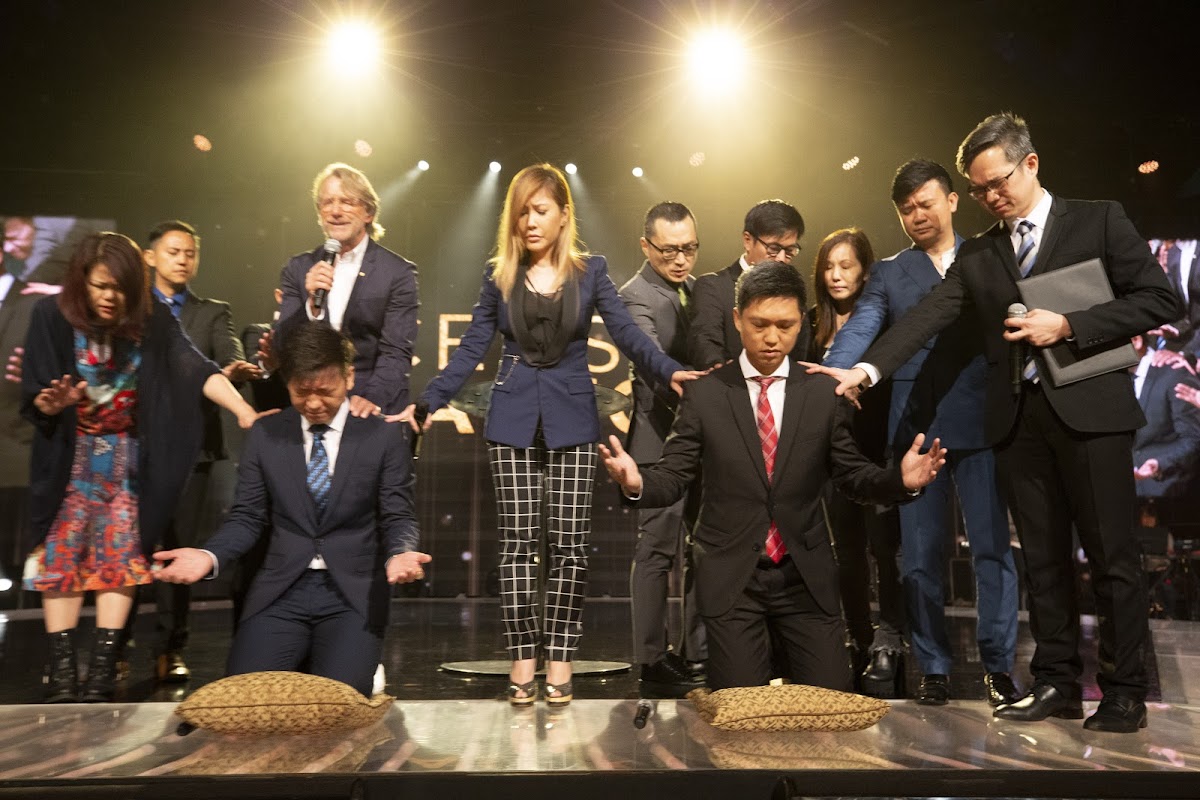 Pastor Tsui expressed his gratitude for Pastor Bobby, whom he says has never given up on them.

Arise Church has around 50 members today. Its congregation comprises young adults in their 20s, families and working adults.

“This was another challenge to me,” said Pastor Tsui. “When I first started the church, I thought I knew everything because I had been a pastor for so long. But over these two years, I came to realize I knew nothing: how to minister to adults and children, how to do administration—I knew nothing.”

Arise Church is planning to move to a venue nearer to the train station in the central area of Kwai Fung next year. “It looks impossible now but we’re all praying,”he said. “Hopefully, a miracle will happen.”