Of Caves, Spikenard Oil, Fishers Of Men And Deep Roots

What does being a deeper person in Christ mean? It involves coming out of darkness, discipleship, devotion to Jesus and becoming more rooted in the things of the Lord. These made up the content of last weekend’s sermons at City Harvest Church, preached by CHC pastors Wu Yuzhuang, Aries Zulkarnain, Lin Junxian and Eileen Toh. 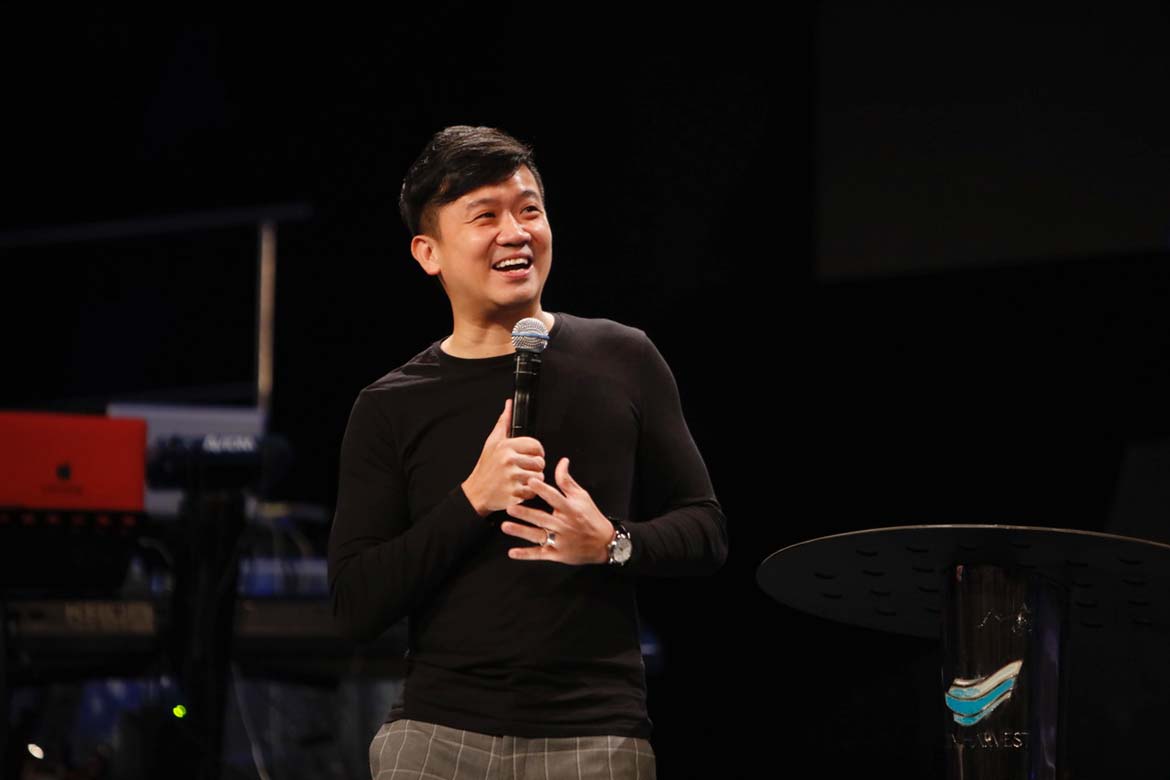 Wu’s sermon was prefaced upon a sermon delivered by his wife the previous week, which covered the importance of seeking God’s perspective in life. Wu dwelt on the “Cave Syndrome” from 1 Kings 19:9, where Elijah had fled those who sought to take his life and was hiding in a cave in the mountains.

Caves possess certain characteristics that mirror situations in life, Wu said. Caves are dark, damp and cold—the seasons in one’s life when it is impossible to fathom what God is doing and when life seems purposeless.

He pointed to Joshua 10:16-18, in which five kings who had been defeated were on the run for their lives from Joshua and the Israelites. Fearing for their lives, they decided to hide in caves. However, later, the cave became a cage for the kings, when Joshua instructed his men to roll large rocks to the mouth of the cave to prevent the kings from escaping.

“It’s the same in life,” Wu pointed out. If you refuse to leave your cave, it can turn into a cage.”

In Joshua 10:26-27, Joshua executed the five kings. Wu shared that if one continues to stay in their cave, he or she would move ”from cave to cage to grave”.

“The cave can eventually become the grave of your dreams, your purpose and your calling,” said the pastor.

Just as Moses was about to give up, God showed up in the form of a burning bush and instructed him to lead the children of Israel out of slavery and Egypt.

“We can give up on ourselves, but God will never give up on us,” Wu declared. Stressing on the phrase used in Exodus 3:10, “Come now”, he told the congregation that God wants His people to come out of their caves. In the same way God used Moses to deliver Israel, Wu impressed upon the congregation that as long as they were willing to come out of their caves, God could use them for mighty works.

The last example he gave was Gideon in the winepress. Although Gideon was fearful, God addressed him as a “mighty man of valor” (Judges 6:12).

“God sees our potential even when we don’t,” Wu stated. Although Gideon responded by complaining and blaming God for his misery, God instructed Gideon in Judges 6:14 to “Go in this might of yours”. Wu shared that no matter how unprepared one feels, to God, what one has is more than enough to fulfill his or her God-given destiny.

Wu urged the congregation to come out of their caves. “What gives Christianity the power to transform lives is the fact that Jesus refused to stay in His cave!” Jesus resurrected after three days and left his tomb.

In conclusion, Wu told the congregation that if they were to get out of their caves, God would use them to bring His anointing, to touch the world for Christ. At the 5pm service on Saturday, executive pastor Aries Zulkarnain preached on the importance of the progression of faith.

Zulkarnain started the service by appreciating and giving thanks to all volunteers who served in the multiple services. It was especially inconvenient for those who live in the east side of Singapore.

“For faith to increase, it requires a degree of inconvenience,” Zulkarnain said as he went on to share how God uses inconvenience to grow a Christian’s faith.

He gave the example of Peter. In Luke 5:1-8, Jesus was teaching from Simon Peter’s boat when he asked the fisherman to “launch out into the deep and let down your nets for a catch.”

This statement brought inconvenience to Peter as he was already washing his nets and preparing to call it a day.

“Jesus chose to inconvenience Peter because sometimes your calling is found in doing what’s inconvenient,” Zulkarnain said. Peter obeyed Jesus and let down his nets and caught a lot of fishes. This miracle transformed Peter’s life as Peter was called by Jesus to be a fisher of men.

Miracles, however, cannot sustain faith, the pastor cautioned. The purpose of a miracle is for the receiver to seek a deep devotion to Christ.

“Faith cannot be sustained by miracles. Faith can only be sustained by devotion,” said Zulkarnain, emphasizing the importance of devotion. He went on to illustrate his point with Mary’s deep devotion for Jesus.

In John 12:1-8, Mary took a flask of expensive perfume and anointed Jesus’s feet, wiping them with her hair. Not long before that, she had witnessed the miracle of her brother’s resurrection. Her actions showed her gratitude and devotion to Him. However, one of the disciples, Judas Iscariot, criticized Mary’s act.

Comparing Mary with Judas, Zulkarnain introduced the term “Christian consumerism”, defining it as a practice based on self-centeredness, as opposed to being centred on Jesus.

“It is a practice of faith that rummages through the Word to find something at a bargain, to suit you or justify your actions,” explained the pastor.

Mary did the right thing; she followed Jesus and gave her heart to Him. Judas, on the other hand, valued money above Jesus.

“Both Mary and Judas saw the miracle of resurrection but Mary progressed from the miracle to a life of worship and devotion to Jesus whereas Judas did not.”

Zulkarnain encouraged the members to live a disciplined life of prayer and Word. God gave His people His Word and the Holy Spirit so that they can go deeper in devotion.

“Devotion is an action, not just a mention,” stated Zulkarnain, adding that the call to follow Christ requires a change and change is always inconvenient. Zulkarnain encouraged the church to be more devoted and to be deep people. At the final service on Saturday, Lin Junxian shared a message on discipleship. He reminded the church that God is cultivating deep people and for that to happen, one needs to have deep encounters with God.

He went to Matthews 4:18-20 which tells of Jesus’ invitation to two brothers, Simon Peter and Andrew, to follow Him. “Then He said to them, “Follow Me, and I will make you fishers of men”. Lin explained that the word “make” in Greek means to construct, to fashion, to form and to qualify as fit.

“Following Jesus is a ‘making’ process,” said Lin. “If there is no following, there is no transforming.”

Lin challenged the congregation to consider the things that have influence over their lives. Are they following Jesus or are they following what the world has to offer? To follow Jesus wholeheartedly is to go on a journey with Him. As a believer walks closer and closer to Jesus, he will become more and more like Christ.

Discipleship, secondly, it is relational.

Jesus spent time with His disciples and He loved all of them. The pastor went on to share that discipleship could only happen when one is in the house of God.

“Our character is not formed apart from people,” cautioned Lin. “Stay within your cell group, church, and ministry.” He encouraged the churchgoers to learn from their cell group leaders, as they are there to help them grow in God.

Discipleship is, lastly, missional. Drawing from Mark 3:14 in which Jesus chose the 12 disciples, whom He eventually sent out as missionaries. He encouraged the congregation that “we don’t change the world by coming to church; we change the world by being the church”.

He further added that the Great Commission was given not only to the 12 but also to the rest of His disciples. Lin likened the ascension to a graduation service for the disciples. Before Jesus ascended, He said to all His disciples that they have become like Him and encouraged them to go further by becoming a disciple-maker just as Jesus did.

In closing, Lin assured the congregation that God does not reveal their flaws to shame them.

“When we are able to see and acknowledge, we can come to an agreement with Him in our fractured areas in our emotions, thinking and attitudes,” said Lin. He added that as one confesses these fractures, one will be able to work with God to forsake these fractures and, in the process, experience a deep change in one’s life. He encouraged the church to trust in the sovereignty of God “to bring the right person at the right time at the right place in your life to disciple you”. In Genesis 1:28, God gave Man the blessing of fruitfulness. His desire was and still is for His people to be fruitful, and in order to do that, they need to allow their roots to dig deep.

Reading from 2 Kings 19:29-30, she guided the congregation in the various ways they needed to deeply root themselves.

Firstly, they must be deeply rooted in prayer.

To be deeply rooted in prayer, one needs to have the capacity to wait. “The Bible says ‘wait for the Lord’. God has a special blessing for those who wait on Him. (Ps 37:9)”

She then shared that the word “wait” in Hebrew is qavah, which means to bind together, to be confident and focused. In short, it means confident expectation—a confidence in God’s wisdom, love, timing and His understanding of the situation. It is the trusting in God’s promises, purpose and power.

Secondly, they must be firmly rooted in the deep springs of God.

In Ezekiel 31:3-7, God likened the peak of Egypt’s power to a cedar tree. It was able to grow tall and strong because of the deep spring water that nourished its roots. The deep spring refers to the Holy Spirit and his anointing upon His people.

Toh encouraged the congregation to be personally hungry for the outpouring of the Spirit. The Holy Spirit is released over CHC abundantly, but it is important for individuals to go deep and search out this abundant water for themselves.

Thirdly, they must be deeply rooted in the faith of God.

Reminding the congregation of how Abraham held on to God’s promise of a son for 25 years, Toh encouraged them not to allow disappointments to change their outlook in life.

“We must be careful that we do not reject or despise God’s Word,” said Toh, referring to Isaiah 5:24. “Instead, ask God to make you strong in the faith and be fully convinced that God will do what He has promised you.”

Lastly, they must be rooted in the love of God.

Reading from Ephesians 3:16-19, Toh explained that when the people of God are deeply rooted in the abundant waters of the Holy Spirit, they will be rooted in the love of God.

Toh concluded by sharing a personal story of the first few encounters she had with God that shaped her life values and led her into her destiny. She encouraged the crowd to seek God in a deeper way than before.