Mother’s Day at City Harvest Church was a memorable event featuring a charming drama performance and a timely message. 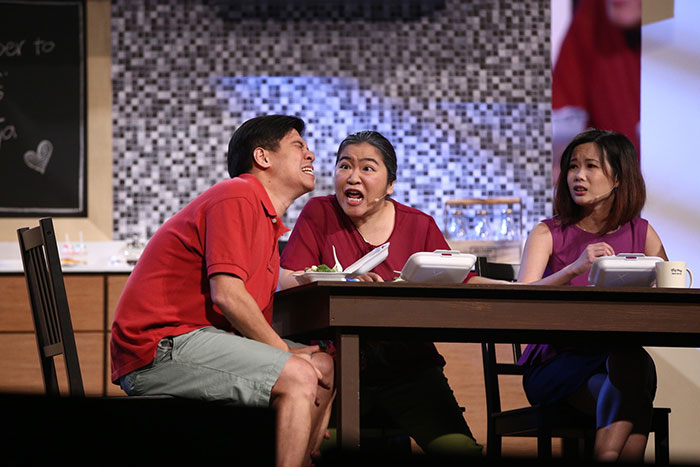 Last weekend (May 13-14), CHC celebrated Mother’s Day with a delightful and light-hearted drama production, followed by the sharing of the Word by executive pastor Aries Zulkarnian.

YAKULT TASTES BETTER WHEN IT IS MIXED

James’s strained relationship with his mother is further challenged when the two experience a Korean drama-style body swap, which happens after they simultaneously drink two flavors of Yakult each and fall asleep. When they awake they discover they are in one another’s bodies. Giggles filled the hall as the congregation witnessed both parties physically experience a day as the other. A work-related Skype meeting with a half-million-dollar contract on the line, and dealing with a difficult teenager were some scenarios mother and son had to deal with while trying to find a way back to their own bodies. This out-of-body experience succeeds in teaching James and his mother empathy and love—just what the family needs to achieve a heart-warming reconciliation in the end.

Following the drama, co-founder of CHC, Sun Ho addressed the congregation and said a prayer for all mothers, honoring them for the roles they play in their family. Reading these verses, preacher Zulkarnain noted how Jesus thought of His mother when He was suffering on the cross. It was thus no surprise that Mother’s Day is the third most important event on the church’s calendar. He went on to share a message about three things members should say to their mothers.

“Mom, I’m Sorry.” 1 Samuel 1:4-6 depicts the family of Hannah and Elkanah. Because He loved Hannah, Elkanah gave her a double portion whenever he had to make an offering. Hannah, however, was miserable because she was barren. Elkanah grew so exasperated that in 1 Sam 1:8, he said to her, “Hannah, why do you weep? Why do you not eat? And why is your heart grieved? Am I not better to you than ten sons?”

“Youth and teenagers, sometimes you feel that your mom is too strict with you and you may ask the same thing: ‘Am I not good enough?’” Zulkarnian said.

Being a mother is not easy and mothers often feel that they are not good enough. This is when they overcompensate and start to “over-parent” their children.

Overcompensating—which is to take excessive measures in an attempt to correct or make amends for an error, weakness or problem—results in many conflicts between mothers and their teenage children. These conflicts may get so bad that their relationship becomes strained.

Zulkarnain encouraged the congregation to look into the hearts of their mothers and understand that they just want to be the best mom for their children.

“If you can see from their point of view, you would say ‘I’m sorry. I should have appreciated you instead of misunderstanding you.’” “Mom, I Love You.” Speaking to the young adults in the congregation, Zulkarnian encouraged them to not neglect their mothers as they become independent adults.

“The issue most people face is that they find it hard to say ‘I love you’ to an imperfect mom,” Zulkarnain said. Some even find themselves wishing they were born with different parents. However, when the God commands His people to honor their father and mother, He is not just telling them to honor the person, but also the position. The pastor reminded the congregation that Romans 12:1 says, “Let every soul be subject to the governing authorities. For there is no authority except God, and God appoints the authorities that exist.”

“Mom, Thank You.” Proverbs 23:22 says, “Listen to your father who begot you, and does not despise your mother when she is old. Remembering the experiences of the elders and caring for them when they are not able.” Zulkarnian encouraged the congregation to listen to their mothers’ advice even though their mothers may not be as educated or clever as them.

“Even a broken clock can be right twice a day!” the pastor said to laughter from the congregation. “It’s worth listening to our mothers because they may be able to give you lessons from their experiences.”

In conclusion, Zulkarnain read from Ephesians 3:19, which says, “to know the love of Christ which passes knowledge; that you may be filled with all the fullness of God.” He encouraged the mothers in the congregation to look to Jesus and let His love fill their hearts.