This School of Theology graduate brings Haiti a new way to do church. PHOTOS COURTESY OF CHURCH OF REFUGE

Many years before he came to City Harvest Church’s School of Theology, a man of God told Rodolpho Merentie that he would pastor his own church one day. It did not make sense to him at that time but years later, God has brought this to pass.

Merentie, 35, hails from Haiti. Some years ago, he was hosting well-known evangelist Peter Youngren in Haiti when Youngren’s assistant gave him the prophecy. At that time, Merentie was the chief usher of the church and the thought of pastoring or starting a church had never crossed his mind. Nevertheless, he kept the prophecy in his heart.

In 2011, Merentie heard about a Bible School in Singapore and decided to travel halfway round the world to enroll. His efforts were not in vain. “Coming to SOT really changed me,” he tells City News. I was quite legalistic, but SOT changed my heart and my viewpoint; I became someone who’s very passionate.”

When Merentie returned to his home church in August 2011, he was promoted to being a pastor. For two years, he served alongside his pastor, but one day, while he was doing his quiet time, he felt in his heart that he was to lead his own congregation.

“I told God, You put it in my spirit to go but You did not tell me where to go. This doesn’t make sense to me,” he recalls. 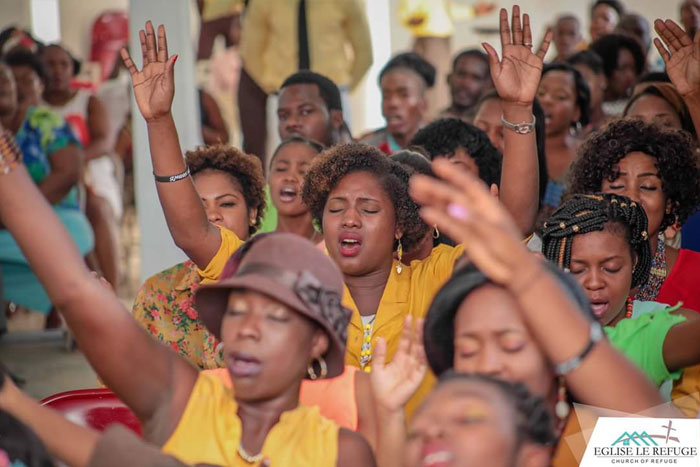 So he sought confirmation. The first confirmation came when his wife, Sherly, now 30, told him that they needed to leave the church they were in and they had to pastor their own congregation. The second confirmation came in the form of a story from the Bible where God called Abraham to leave his hometown Ur, yet God did not tell Abraham where he was going. Nevertheless, Abraham obeyed. And so Merentie did the same.

At this point, Merentie had no clue that God wanted him to start a church. The rhema word did not come until he received a phone call from a friend telling him that she missed his preaching. “She jokingly said that there was a big space in her rooftop and I could go and preach over there,” he recounts. “The moment I put down the phone, the rhema word of God hit me. I was to build God a church.”

Ideas started to flow once Merentie received the word from God. He began working on the church’s mission statement, logo and vision. His wife was away on holiday and because Merentie was still waiting for a confirmation, he did not share the revelation with her. Upon her return, she immediately told him that she felt the Lord told her that they should start a church.

“I was so happy when I heard what she said. It was the confirmation I was looking for.” Church of Refuge started with 12 members in Merentie’s living room. Since its first meeting on Sep 22, 2014, it has grown to a congregation of 200 members.

It was time to find a sanctuary. Merentie prayed and God showed him an area right in the middle of the business district. The rental would cost at least USD5,000 a month.

“We didn’t have that kind of money, but we trusted God,” says Merentie. “One day, this person that I’d forgotten about called me. She told me that there’s a place near her house that I can rent for the church at a lower rent. I went to see the place and it was really ugly. Terrible. I brought my people to see the place and although they didn’t say anything, I could tell from their faces that they had doubts about the place.”

Merentie decided to take up part of the hall and his team worked on that place for two months, painting it and transforming it into a sanctuary for God. “We spent all the money we had on the rental and we didn’t have money to even buy chairs,” he remembers. “Thank God that my sister and some church members came up with some money to buy 48 second-hand chairs. I drove from north to south just to buy those chairs.”

When Church of Refuge held their first service in the hall, they had no guitar, no keyboard, no microphone–they had to play music from the phone during praise and worship–but the hall was packed with people.

“We didn’t even know anyone in the neighborhood. It was all by the grace of God. Since I started the church until now, God did everything for us. I never had to beg for money. God always provided,” he says.

As the congregation grew, the church eventually had to rent the entire hall for their worship service. Recently they were presented with the opportunity to buy the land across the road from where their church was for USD50,000. Merentie is praying for God’s provision.

“The Holy Spirit is the One who really helped the church grow,” he stresses. “Most of the churches in Haiti worship with hymns and when my wife and I came to SOT, I fell in love with the songs you guys worship with. My wife is a worship leader, so when we started our church, we translated CHC songs into Creole and people found that it’s something new and they are really excited [by it].”

Besides having good worship sessions, Merentie also believed in quality fellowship, the same way the first church grew in Acts 4. “I built the church on the book of Acts 4, where people sit together, eat, fellowship and share their lives,” he shares. “In Haiti, when people go to church, they don’t talk to each other. After they finish worshiping God, they will leave. But in Church of Refuge, we have strong fellowship, we are like a family. That’s why when people step into our church, they know that we are different.” Most importantly, Church of Refuge has a structure that helps its members get grounded in the basic spiritual disciplines of reading the Word and praying. “Every Tuesday we have Bible study lessons and I teach using SOT materials. Thursdays we have prayer meetings and on Saturdays we have classes for the new coverts. On Sunday, we meet from 8 to 10am. But in Haiti, all the churches have services from 8 to 12pm. In SOT, Pastor Bobby (Chaw, Dean of SOT) taught us that shorter services are better and people will stay excited. I did what I was taught and hold two-hour services. People love it!”

The young pastor attributes the growth in his spiritual life to the teachings in SOT and City Harvest Church. “Pastor Bob, Pastor Kong and you guys (the church) do such amazing things in my spiritual life. I say to my wife all the time, ‘I wish CHC members realize what they have.’ Sometimes in life, you can have something really precious but you don’t pay attention until you lose it. CHC, you have something really special. Whenever I feel dry and stressed out, when I open my Bible and not feel anything, and I still have to preach the day after, you know what I do? I go online and watch CHC’s service online. Five or 10 minutes of watching your service and I’ll feel refreshed. It always works for me,” he says.

“Whenever I pray for CHC, I always say to God: this cannot happen, Pastor Kong needs to be free. Can you imagine, your church is doing great things to people’s lives all the way in Haiti. Your songs can bless people, it’s unbelievable.

“I love this church.”