Beyond providing quality tuition to the students, founder of Ascend Tuition Centre Howard Kuay wants to help students find their goals in life. 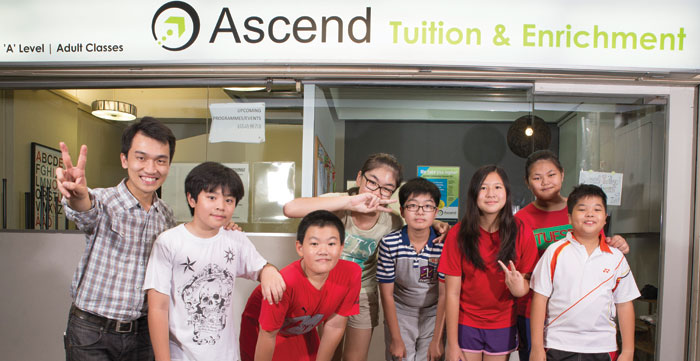 Kuay with his students
PHOTOS COURTESY OF HOWARD KUAY

At Block 16, Upper Boon Keng Road, amidst a row of old-school shops at selling bread, fruits and knick-knacks, there sits a tuition center. Ascend Tuition and Enrichment School is an unassuming space, and its philosophy is equally simple: it exists purely to help students find their place in society.

“I started the tuition center in 2010 to help students who couldn’t afford one-on-one private tuition,” says Howard Kuay, founder of the school. “I discovered that the syllabus in school was getting more difficult, and there were those who needed help but couldn’t afford any. I wanted to help these kids understand their subjects, and at the same time, give them a hope for their future.”

Ascend aims to provide quality tuition at an affordable price, and at the same time provide a safe and conducive environment for children to study.

MORE THAN A TUITION CENTER

The idea to start a tuition center started when Kuay was a volunteer with CityCare, a social enterprise dedicated to promoting volunteerism in Singapore, and one of its target groups was schoolchildren. While running programs in schools, this volunteer noticed that some of the students needed guidance in their life.

“One of the students that I taught told me that he wanted to be an engineer, but he was failing in mathematics,” Kuay recalls. “If no one had told him that he needed good results in mathematics to get into an engineering course, he would be in for a big surprise later on.”

Ascend was founded as a solution to offer help to children who needed support in their studies. The center will accept students from primary through university level—Ascend’s belief is that as long as it can help the child, it will take them on. The center has two teachers teaching 20 classes a week. Although the center’s primary purpose is academic studies, Kuay’s passion has, on more than one occasion, caused him to go beyond the call of duty and help his students in personal matters.

“When a child doesn’t do well in school, there could be pre-existing issues,” he notes. “To understand the situation that the child is in, my team at Ascend would sometimes do home visits and speak with their parents.”

During such visits, Kuay and his teachers would update parents on how their child was faring in his work, and they would provide tips on how the parents can help their child improve. They would also try to find out more about the student’s background or talents to render help if needed. Kuay shares one such case.

“There was this Primary Five girl who was an average student. I noticed that during the break, she would doodle on her paper and her drawing was actually very good. I spoke to her mother and suggested that her daughter pursue art. She agreed and I started to help her do up a portfolio. Her heart was set on going to SOTA (School Of The Arts), and once she had that vision, she worked hard towards that goal. Her results in school started to improve and she eventually got into her dream school.”

Kuay believes strongly in helping his students gain intrinsic motivation—the student studies because he finds learning intrinsically rewarding, not because he is rewarded for good performance.

“Parents tend to encourage their children to learn by rewarding them for their good results,” Kuay observe. “In the end, the child would only do the bare minimum, only as much as it takes to get the reward. Experts say that we ought to focus on the process of learning instead, so that the child will understand that it is the effort they put into learning that counts.”

Kuay acknowledges that there are also students who simply cannot do well academically, but this doesn’t mean the end of the road for them. “Even if they are not doing well in school, I want to help them attain the best fighting chance in life,” he says. “They will need to know what other good options are available to them.”

Such a student came to him at Secondary Two, and it was obvious that the student would not be able to do well in school despite his best effort.  After some discussion with Kuay, the boy’s parents decided that it might be better for him to apply to an Institution for Technical Education (ITE). Because both parents were Mandarin-speaking and could not read English, Kuay helped them with the paperwork and even helped the boy apply for a bursary.

“We don’t expect every student to get into polytechnic or university but we do what we can to help them,” he says. “We don’t want them to just do well in studies; we want them to become better people.” FROM LEARNER TO TEACHER

Kuay understands his students because he was once that clueless student. “I owe my life today to God and to the teachers I had. I had really good teachers,” he says.

At Secondary Four, Kuay was involved in six co-curricular activities in school, but he was not interested in his studies. He did not even know what “L1R5” was when he received his preliminary examinations results. Needless to say, he failed almost all his subjects.

“Thankfully, I had a science teacher that gave a few of us tuition after school. My result jumped from F9 to A2.” Even though he got into Millennium Institution, Kuay found that he was
not satisfied. He asked to retake his ‘O’ levels while studying in MI but his principal did not allow it. Soon, he dropped out of MI.

“For one whole month after I stopped school, I was in depression. I stared at the ceiling every day thinking about my life,” Kuay recalls. He eventually picked himself up and started a ritual. Every morning, he would take long walks to pray and reflect on his life. He applied to Temasek Polytechnic and got into its Communications course.

One year went by and Kuay achieved 14 points after retaking his ‘O’ levels. He left Temasek Polytechnic and entered Meridian Junior College. He eventually graduated from National University with a Bachelor of Arts (Political Science).

Today, he is far from that oblivious youth. To better equip himself to help his students, Kuay invests his time in looking for innovative and creative teaching methods. He recently graduated with a Master in Education from Monash University. He also took a trip to Japan to attend master classes on teaching methods and classroom management.

Kuay’s education was not the smooth journey many expect from their school careers. But he overcame the many obstacles he faced to become not just a successful student, but the producer of successful students today.

“Once, during national service, I was part of a team that raided a karaoke club that housed illegal activities. Some of the people we arrested were my friends from secondary school,” he recalls. “God spoke to me there and then. He said, ‘If you had not gone through all that period of hardship, you would be doing these illegal activities too.’

“That shook me. I thank God that He has allowed me to go through those experiences and has put people around me to help me,” he says.

Celebrating Teacher’s Day: Beyond The Books