He was a children’s pastor at a small family church, ready to become an Anglican priest. She was the children’s church pastor of a megachurch, who had been trusting God to bring her the perfect spouse. The love story of Johann Sim and Eileen Toh is so incredible, only God could have written it. I received Christ at the age of ‪19 as a student in St. Andrew’s Junior College. Rev Canon James Wong, who led the Chapel of the Resurrection from 1979 to 2001, was my first senior pastor. After I completed national service I answered the call to full-time ministry under Canon Wong. I served as a children’s pastor under him at Chapel of the Resurrection and helped to run children’s programs in every church-planting effort initiated by Canon Wong. As the children’s pastor in that small family church, I had to do literally almost everything; from the teaching curriculum, putting together the PowerPoint slides, physically arranging chairs and tables, leading the weekly children church programs and even ferrying children to church. It was a one-man show and I was really busy serving God and the church.

Someone once told me that a life partner should ideally support your calling and you should share common spiritual goals. She should be able to get along with your family, and there should also be great chemistry and effective communication between the both of you. I had that at the back of my mind as I continued to serve God faithfully.

Unknown to both Eileen and me, God was already setting things in motion. Eileen’s third sister attended the same church as me, and she and her husband had been trying to link the two of us up for the longest time. But we were too busy, or maybe too shy, to respond to her act of kindness.

Finally, she gave up and sent both of us a text on the eve of Good Friday, 2009. It read something like this:

“Hi John, this is Eileen’s number.

Hi Eileen, this is John’s number.

John will contact you to arrange for a date.”

I was so amused by this that I decided to ask Eileen out for a date that very Thursday. She did not reply me until more than three days later, on Monday! I thought to myself this woman is really one of a kind… even Jesus resurrected from the dead faster than she replied.

On our first date over coffee, I found Eileen interesting and easy to talk to. Before the date ended, I decided to ask her out for a second date.

After dating for about three months, Eileen introduced me to Pastor Kong Hee, senior pastor of her church, City Harvest Church. Pastor Kong was very friendly when he shook my hand. Then he looked at me like a protective father would and asked me very firmly: “Are you serious about her? Otherwise, don’t waste her time! Are you planning to marry her?” At that point, I had not thought about all this but it was a good wake-up call for me. I seriously began to think about our future and if this girl was the one for me.

During that period, I felt that God was doing something deeper in my life. I had always thought that I would go down the path of becoming an Anglican priest someday. But as I continued dating Eileen, we both realized that we would soon have to face the issue of us serving in different churches. We both knew that we wanted to be together, serving in the same church and raising our family together in the same church. So I decided to pray and fast for three months to seek God for a clearer direction. At the end of those three months, we both felt the peace of God and sought confirmation from our leaders, in particular Canon Wong and his wife Sister Esther, that I should move over to serve in City Harvest. I enrolled in the School of Theology in April 2010 and a month later was offered an opportunity by Pastor Kong to serve in the pastoral ministry.

Eileen and I were married in November 2010 and we serve together in ministry as staff of City Harvest Church today. We want to thank God for bringing us together and for blessing us with a beautiful boy, Kairos. I gave my heart to God at the tender age of 6. Growing up, I often told God that I want my life to count and I want to serve Him in my generation.

After attending City Harvest for a few years, I went full-time and was placed in charge of the Children’s Ministry. Under my care, the ministry grew from 60 children to the thousands that come to church each weekend now.

My youth was spent serving God and I firmly believed that God would grant me the desires of my heart for a good spouse at the right time; I trust that His ways are higher than my ways.

Of course, there were times when I felt like I was always waiting, wondering and wanting to be attached. Time was not on my side: I was in my 20s, then 30s, mid-30s, then late-30s, and still, my knight in shining armor did not appear. Many of my friends got married. I attended their weddings, then their baby showers, and their kids’ birthday parties. It was unbearable, but I never gave up.

I had many questions like, “God, why am I not attached, when I’ve served you so long?” and “Am I too strong for a man?”. Even, “Am I not attractive enough?”

But each time those thoughts came to mind, I quickly refuted them by confessing positively: “I am loved! I am valuable! I am capable!” And that’s how I placed my trust in God. It came to a point where I would tell God, “Even if I am not married, I will still want to love and serve You for rest of my life!” When I first received Johann’s SMS, I was very hesitant to respond. But I had always told my single friends and members to be open to dates, so I had to set an example for them. Moreover, Johann fulfilled some items on my list: he was a Christian: check! And he’s on fire for the Lord: check!

Our first date turned out to be a funny encounter. We were supposed to meet at  BreadTalk in Bishan. We didn’t know what each other looked like because Johann was not active on Facebook. So he called me and said, “Hi Eileen, are you at BreastTalk?” I couldn’t stop laughing. I expected him to turn out unattractive. But when I saw him, I thought, “Not bad! He’s quite a hunk!”

One date turned into two. Two dates turned into three months of dates, and I brought him to meet Pastor Kong. As we became more serious, Johann took the plunge and joined me at City Harvest Church as a pastoral staff member. 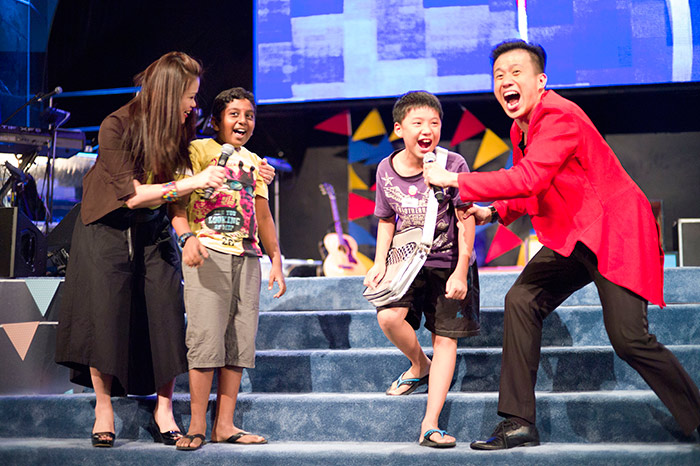 A year and a half later, on November 7, 2010, Johann and I tied the knot. Today we are both full-time staff in the church. We are still very much in love with God and we serve Him together. I help Johann in providing pastoral care to his zone members and he helps me in the running of Harvest Kidz service on Saturdays.

There is something amazing in this whole story as well. One of my biggest regrets is that my Mom never got to meet Johann because she passed away a year before we met. But one day, we were going through some old photos of my mother being water-baptized at Chapel of the Resurrection. Guess who was right next to her, helping to baptize her in the baptism pool? It was Johann! Without realizing it then, my future life partner was in the pool with my beloved mother! It brought tears to my eyes to know that God’s hand had been moving all the time I was serving Him. Johann and I were strangers then, but God knew what was to come, and captured that moment in this photograph.

To all the singles out there that are still waiting for your Ms/Mr Right, we want to leave you with a verse from Ecclesiastes  ‪3:11: “God has made everything in His time.” God is always working behind the scenes to write out your life story. You can always trust His ways and His heart.