The School of Theology’s 21st intake sees 345 students — more than half from overseas — taking on the seven-month Bible training course. As a brand new school term of the School of Theology began for the year 2015, students gathered in the City Harvest Church’s Jurong West premises on March 16, the first day of school. Excited students filled the hall; the atmosphere of enthusiasm was impossible to miss. SOT is a Bible college founded in 1994 by Kong Hee, senior pastor of CHC. The class of 2015 has an intake of 345, and for the first time in the School’s history, more than half are foreign students.

The praise and worship segment led by worship leader, Annabel Soh opened the morning, ushering in the presence of God. The session started with a video message from Kong: he welcomed the students and expounded on three essential aspects of Christian ministry: faith, the Holy Spirit and leadership. Quoting from the book of Ephesians, the senior pastor encouraged each one to expand his or her capacity and to grow closer to the Holy Spirit, to embrace and love one another even though the intake is made up of people from different cultures. CHC’s pastors took turns to address the new students. Sharing a message on how students should live by revelation and not information, Aries Zulkarnain, executive pastor of CHC, inspired the students to be more connected with the word of God. He challenged them to translate head knowledge to heart knowledge, and encouraged them to let the seven months of SOT be filled with meditation of the word, even in the midst of trial and tribulation.

Pastor Wu Yuzhuang encouraged the students to work towards a revival in their spirit. Sharing from the book of Genesis, he used the story of Jacob to illustrate how the spirit of a person can be revived and born again. He encouraged the student body not to be laidback in their service to God, but to have a spirit of revival; desperation will precede demonstration, he told them. 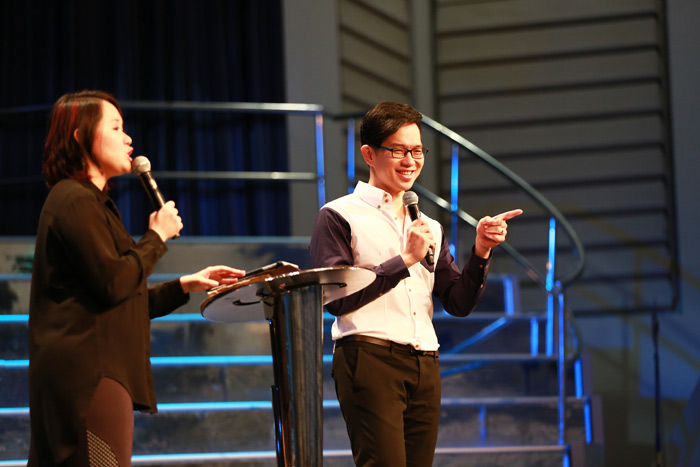 Finally, Bobby Chaw, SOT’s principal and dean of students, taught the students that the Christian life is a life of sacrifice. Sharing from Romans 12, Chaw showed the student body what it meant to present their bodies as a living sacrifice. “Sacrifice is always related to death; the only way to experience resurrection life is through death,” Chaw said. He enlightened the students that death may not be physical, but it can come in other forms such as trials and tribulations. The only way for them to experience greatness is to go through death. He further elaborated that death is a transition of mortality to immortality, and death without resurrection is not a death in Christ but an enemy. He motivated the student body to present their lives as a living sacrifice to God, to grow from the lesser to the greater. For the intake, each was a timely message as they began their SOT journey. A couple from China, Su Yun Jie and Li PengPeng, both in their 20s, told City News, “We felt that Pastor Aries’ message on translating knowledge from the head to the heart was very relevant to us as we begin our journey here in SOT; we agree that knowledge being translated to our hearts is very significant.”

A student from Singapore, Jonathan Lim, 21 shared: “Coming to SOT, I believed that we all have a certain expectation of God’s presence, but right there I was so blown away as the atmosphere was really different. The students from different countries coming to worship the same God—it’s something so personal yet so powerful. I was absolutely blessed by the messages shared by all the pastors. They really brought a lot of laughter and fun to our first day of school!”

The day continued with a short time of orientation games filled with fun and Bible verses followed by a lunch reception to get the teams to bond and foster relationships. Altogether a strong start to the new semester.