In celebration of 20 years of City Harvest Church’s School of Theology, international graduates gathered for two days of sharing and encouragement. “Homecoming: Gathering Of Hearts” was the theme for the reunion  for City Harvest School of Theology’s alumni, held on Aug 24 and 25. From start to finish, it was an enthusiastically-celebrated gathering at CHC’s Jurong West church.

The alumni were clearly thrilled to be back visiting their alma mater. All over the church—from the Level Four rooms where registration counters had been set up, to the lift lobby where backdrops had been put up for photo-taking, or the main auditorium in basement four, graduates were seen exchanging hugs, engaging in long and deep conversations, and of course, taking selfies. Many foreign graduates have not been in Singapore since they graduated and it was the first time they were having a reunion with their teammates. Bryan Lee, 24, an SIM student and 2009 alumnus, said, “It was a good time of catching up with old friends and it was really good to hear how their ministries have grown and to celebrate their success.”

Ye Qingqing, 40, a cell group leader from CHC Kuala Lumpur and an 2012 SOT alumnus, said, “Returning this time, visions that was initially fading was once again poured upon me, my soul once again renewed and calling challenged.”

The anticipation for Homecoming had been building up the weeks prior as SOT graduates around the world contacted their Singaporean teammates and made travel arrangements. Over 300 graduates flew in from around the world to attend the meeting. In these past two decades, graduates of SOT have gone all over Asia and the world to establish strong churches; many came back that weekend with inspiring testimonies to share during the Homecoming services.

One of them was Andres Docena, the senior pastor of Dadiangas Baptist Church in General Santos City in the Philippines. He took what he learned at SOT in 1996 and 1997, and created a successful social program, the Family Resource Allocation Management and Enhancement (FRAME), to alleviate poverty by educating 30,000 families every week.

Another was Garrick Li who started a church of six members in his living room in Banqiao, Taiwan in December 2013. As the members invited people, and held  evangelistic meetings in high schools, they saw 140 decisions for Jesus. Since then, his church has grown to its current strength of 60 members, who average 17 years of age. 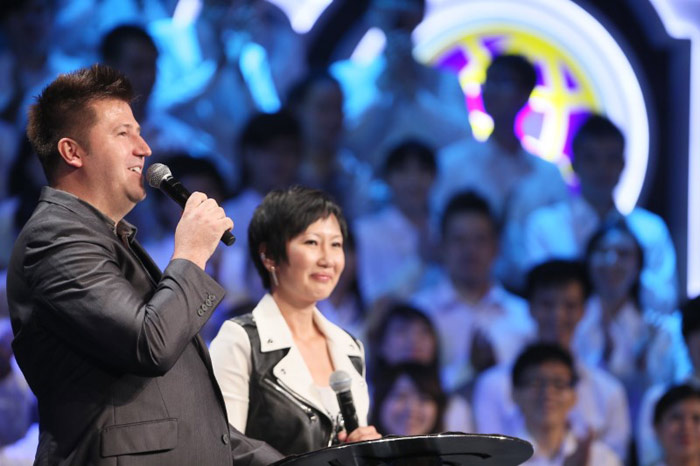 CHC’s former executive pastor, Derek Dunn founded CHC US with his wife Susan, in Irvine, California in the US. Susan, a Singaporean, attended SOT in 1998 in the midst of running a busy insurance business. She said, “But I’m glad that I went to SOT because that was the time when my capacity was stretched as I handled both work and ministry.”

Having decided to hold their maiden service last Easter, the Dunns began looking for a worship location. The challenge was that many venues were not willing to lease to a church. Dunn had a vision from God to use a movie theater and soon, they found one. However, their lease was subject to the approval of the mall management. With three day to the inaugural service and no approval in sight, the Dunns asked for temporary use of the venue, told their core team of the predicament, and waged spiritual warfare in prayer. The minute their prayers ended, the phone rang with the good news that they had the approval. CHC US started with six people, but it has since reached 69 members in regular attendance.

Fandy Latief, a graduate from the class of 2009, is the youth pastor of GBI Aruna in Bandung, Indonesia. When he first started his ministry, there were only 15 people and he felt that there was no way to grow. Wanting to escape ministry he enrolled into SOT in 2009. He revealed that he was secretly hoping that he would be replaced by another pastor. Throughout the five months in SOT, Latief caught a renewed vision and passion for the youth. Upon returning home, he shifted the focus of his ministry–instead of conducting events, he began to lead his team to seek the presence of God. He would pray with his team for revival daily and the youth services were modeled after CHC’s services. Shortly after, the youth group experienced tremendous growth. He concluded his testimony with Psalm 92:13, ‘Those who are planted in the house of the Lord shall flourish in the courts of our God.’

MISSIO DEI (THE MISSION OF GOD)

It has always been God sending someone, because God is a sending, “missional” God, said Kong. Drawing reference from John 3:16 and Acts 2:17, Kong described how God sent His only begotten Son and how the Father and the Son sent the Spirit to all flesh; and finally, how Jesus has sent the Church into the world (Matthew 10:16; John 17:18; and John 20:21).

Imago Dei, the Image of God, is the concept that God is a creative God and it is from this concept that CHC’s Cultural Mandate message originated (Genesis 1-2). But Kong exhorted the attendees to rediscover Missio Dei or the Mission of God (Genesis 3 to Revelation), which is to redeem, renew, and restore our broken-down world. 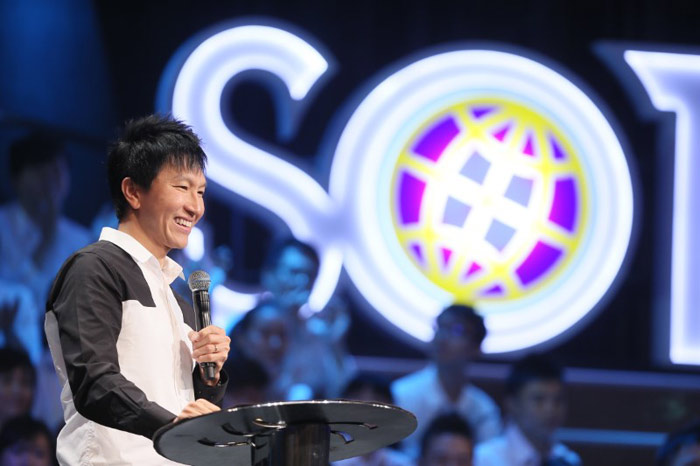 “As we all grow older, we can become very good at church things: Bible study, cell groups, and events, but we can lose the passion to share the good news. We can excel so much in our acts of kindness that Jesus Christ never gets featured in our conversations.”

Kong warned that in attempting to be accepted by the world and to forge relationships, the Church becomes too afraid to actively fulfill the Great Commission—to preach Jesus through evangelism.

The senior pastor shared a personal story about a girl he had a crush on when he was 15. They met at a three-day children’s event organized by YMCA, and he managed to get her phone number. He spent the next few weeks calling her every night. This went on until she finally told him that he was not her type and they would never be together. Heartbroken, he ceased.

Two years later, Kong was serving as a counselor supervisor—the leader among the counselors—at the National Stadium for a David Yonggi Cho event when he met the girl again. In their conversation, she revealed that she had been a Christian for six months while he told her that he been one for the past 10 years. When she realised that Kong was a Christian the whole time they were conversing two years back, she asked: “So why is it that your light didn’t shine?”

Concluding his anecdote, Kong shared that friendship evangelism is not evangelism if Jesus is never mentioned in a conversation.

In another narrative, Kong shared an account of two siblings from Indonesia who went on missions trips to countries that were on the World Watch List, a ranking of top 50 countries where Christians suffer religious persecution. The older brother went to North Korea—which topped the World Watch List—with his cell group and managed to reach out to  youths. They conducted a flash mob in a park that attracted a few young people. After connecting with them, they shared the Gospel with them and managed to get 60 North Korean youth saved and water-baptized in the end.

His younger sister felt led by God to go to Iran, which is number nine on the World Watch List. Traveling in a group of three students, she and her friends stayed with  different families each night. Every home she went to, she shared her testimony, led the household to salvation, and baptized them in their bathtubs!

Kong then drew attention to the fact that these were countries where sharing the Gospel is hard. In contrast, there are religiously-free states like Taiwan and Singapore, where freedom should be taken advantage of and the Gospel should be boldly proclaimed.

“We cannot lose the vision in our desire to be cool. We cannot forget what we are cool for,” concluded Kong. The next evening saw Kong sharing a word on how Christians are being sent into the world not just to engage culture and preach the Gospel, but also to live for Jesus. He reminded the congregation not to be so caught up with engaging culture that they become Biblically irrelevant.

Kong introduced the term “moralistic therapeutic deism” which is how some young people view Christianity today. He went on to expound on the term: “moralistic” means to be good, nice and fair; “therapeutic” suggests that Christianity is all about feeling happy and self-empowerment; and “deism” denotes a God who is not involved in human lives.

“This concept of Christianity is missing on an essential part of being a Christian, and that is to suffer for Christ,” said Kong. Sharing from Acts 9:16 which says, “For I will show him how many things he must suffer for My name’s sake”, Kong explained that suffering for Christ’s sake is part of living for Him; life is not just about feeling good all the time. Kong quoted evangelist Dietrich Bonhoeffer: “You can trust God and yet never follow Christ,” emphasizing the fact that following Jesus can be very costly.

He ended the meeting by challenging the SOT graduates to never to let anything stand in the way of their relationship with Jesus. He also reminded them that as SOT students and graduates, they are a people chosen to do amazing things for Jesus all over the world, but they must not be afraid to suffer for His name’s sake.

Latief, whose testimony was heard during Homecoming, said, ‘This homecoming service has encouraged me greatly and reminded me once again about the calling in my life to make a difference in the lives of the young people of this generation.”

The SOT graduates were greatly encouraged by the Homecoming services and caught a renewed passion and vision for God. As they returned home, they carried this new passion with them, ready to do greater works in their cities.

Eugene Teh and Anne Tan