Angie Across America: Support Her Journey

She will be the first Southeast Asian female to cycle 4,233 miles across America. Angeline Tan talks about her dream to chronicle her journey on two wheels in the form of a documentary—an effort readers can support. To look at adrenaline junkie Angeline (“Angie”) Tan, one wouldn’t imagine she was ever overweight. It was the prospect of looking less than fabulous in her wedding dress that got her running. Four years ago, her husband had pulled on his running shoes that first time to accompany her—and she never stopped after that (even though he did!).

“I advanced rather quickly from one endurance event to the other,” she describes. “After running my first marathon (which I didn’t sign up for—a friend of mine couldn’t run and asked if I would take her place. I’d never trained for one but I ran in her place) I discovered I loved the pain and experience, and immediately signed up for the next marathon a few months later. I shaved over an hour off my previous timing. I then took part in an Ironman race (3.8km swim + 180km bike + 42km run).

In December last year, Tan decided to take her passion a huge step further: by being the first Southeast Asian female to participate in the Trans Am Bike Race. On June 7, 100 cyclists begin their journey from Astoria, Oregon, on the Pacific Coast, and end their ride in Yorktown, Virginia, on the East Coast of America. There is no time limit to complete the race, but Tan has upped the ante with her own plan. She is one of six key participants whose journey will be captured in Trans Am’s official documentary, but she is going to ride with a video crew to film her own documentary.

“My cause is two-fold,” she tells City News. “One is to inspire people to push themselves to the limit. I’ve personally only ridden 150 miles in a single day; to do that for 40 consecutive days would require me to go further and beyond what I think I can. But I believe the human body is very adaptable—after a few days or up to two weeks, the body will condition itself to adapt to the stress and perform beyond what we think it normally can.

“Two, (as I cycle across different states, cities and towns in America) I want to draw out inspirational stories of cultural assimilation and the stories of former sports heroes. These two groups of people embody the tenacity and adaptability of the human spirit.” 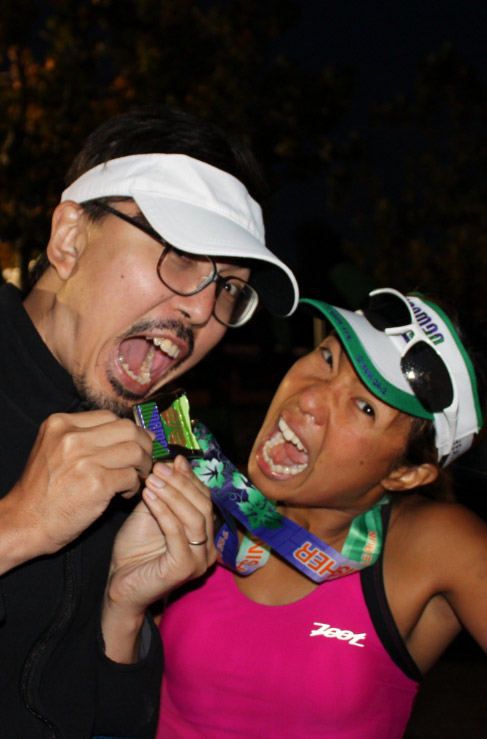 Tan plans to ride into various towns and to locate the perfect people for her film. Why immigrants, we ask. “Over the years, people have migrated to the United States for various reasons—to escape political instability in their home country, to seek a better life, for education, work, etc. These people have to learn to assimilate into the culture here, build new lives for themselves and their families, and learn to adapt and survive. In the course of their building new lives here, they have to overcome possible language barriers, cultural differences and various difficulties. By interviewing them, I hope we can take a leaf from their stories and be inspired to overcome challenges in our personal lives,” Tan explains.

Her other interest group are former professional sportspeople. “These are former champions and sports legends, now retired or no longer practicing their sport. I hope to draw out stories and lessons from them on their mountaintop moments, valley low experiences and how are they adapting to new lives outside of the sport they once devoted their whole lives to,” she adds.

The 35-year-old is a former paralegal who went on to become a researcher and writer for a television production house. “We produced popular documentaries for international broadcasters including NatGeo, Discovery Channel, History Channel, Lonely Planet and BBC World,” she says. A City Harvest member before she moved to the US, Tan was also an audio editor for the church’s former bookstore Attributes, and a cell group leader.

Hence the passion for this documentary, which she hopes will be picked up by the likes of National Geographic or Discovery Travel & Living. But to fulfill her dream of completing this documentary, Tan needs to raise US$40,000 through crowdfunding. She will be riding alongside two video crew members who will be following her in a chase car. Her goal is to be the first Southeast Asian female to complete her journey and her interviews within 40 days.

Do support Tan in her noble pursuit. You can donate to her project here. Do read more about her and follow her progress at Angie Across America.