Dialect Church: What A Risen Savior Can Do

Easter came early for Dialect Church this year with a heart-warming drama for the elderly attendees. City Harvest’s Dialect Church presented its Easter drama on Apr 13 at CHC’s Jurong West church. Titled “Lai Gen Cong Wo” in Mandarin, which translates into “Come, Follow Me” in English, the drama told of how Mary Magdalene had an encounter with Jesus that changed her life.

The production opened with Mary being brought before Jesus, who rescued her from being stoned. Her testimony spread like wildfire throughout the town and caused Zacchaeus, the tax collector, to repent and follow Jesus. The drama also portrayed many miracles that Jesus did during His earthly ministry, like raising the dead, healing the blind and bringing deliverance to the poor.

The actions, together with the melancholic voice of the lead actress, captured the full attention of the elderly audience. As the story reached the climate—the resurrection of Jesus—many in the audience stood up and took photos of that beautiful moment. After the drama, Maria Tok, pastor of the Dialect Church, took to the pulpit and delivered her sermon in Hokkien. She preached on what a risen Savior can do for His people:

1. Call Your Name
Reading from the passage John 20:15-16, Tok said to the mostly-elderly crowd, “If I’m on the street and I bump into you, I’ll most likely greet you ‘Uncle’ or ‘Auntie’ if I do not know you; but if I know you personally, I’ll definitely greet you by your name.” That was how Jesus called out to Mary after He resurrected—and Mary instantly knew that it was Jesus. He did not call out just any name; Jesus called Mary by her name. Reading from Jeremiah 1:5, Tok assured the elderly congregants that Jesus remembers all of His followers by their name and that He has a plan for every one of them.

2. Calm Your Fears
John 10:10 says that the thief came to steal, kill and destroy but Jesus came to give eternal life and a life better than anyone could dream of. Using Mary Magdalene as an example, Tok said that her life took a downturn when she was accused by the Pharisees of being an adulteress. At the lowest point of her life, however, she met Jesus and He became her lifeline. “In whom do you trust to calm your heart?” Tok asked. She encouraged the congregation to put their trust in God and to have faith that He can help them to calm the fear that they have.

3. Comfort Your Sorrows
Preaching out of John 20:15 in which Jesus said, “Woman, why do you weep? Who are you looking for?” Tok explained that Jesus is very concerned when His believers are in sorrow. Every time they weep, He knows and He wants to be there to comfort them.

4. Conquer Your Doubts
When Jesus called out to Mary in John 20:16, Mary instantly knew that it was Jesus and that knowledge helped her conquer her doubts in life. As the preaching of the word concluded, Tok called for those who want to receive Jesus as their Savior to lift their hands up. Many raised their hands and accepted Jesus into their lives.

In all, 54 elderly people received salvation. One of the most heart-warming moments of the service was when an elderly woman walked up to the front of the stage leaning her walking stick, responding to the altar call for salvation. It was clear to all that day that Jesus is alive to save. 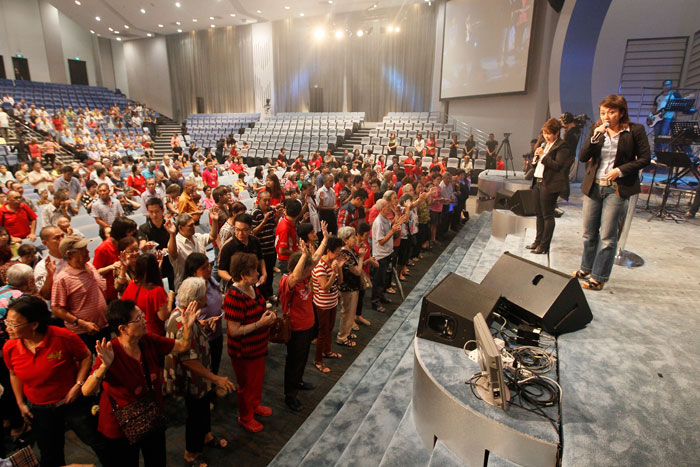