This City News writer, who volunteered with the CHC Medical Disaster Relief Team 4, shares the inside journey of the mission to Iloilo. The fourth medical relief team was deployed to Iloilo, Philippines on Nov. 30 2013 and returned to Singapore five days later after an intense and successful rotation of service to the people of Estancia and various barangay in the region. Team 4 comprised four doctors, four nurses, one medical student and 11 volunteers of varying experience and professions.

Team 4 left Singapore on the evening of Nov. 30 and travelled overnight on two flights, reaching the humble Iloilo airport before 6am, Dec. 1. The team, though blurry-eyed from overnight travel, began to load supplies and were soon warmed and energized by their first sunrise upon Philippine shores. The blinding light breaking the night marked the start of the three-hour journey to base Estancia.

Once at the base, the team hit the ground running. In a flurry of activity, Team 4 unloaded all the stores, dropped off luggage and sat down for a quick bite and their first briefing. There was no chance to freshen up after 12 hours of transit as there was no running water or electricity during that daylight hour. As it was a Sunday morning, Team 4 split into two groups to attend morning services at the Estancia Christian Centre and King of Glory Church. Team leader Elaine Chua and member Mabel Fang had each prepared a short message of encouragement to share at the respective churches.

As the two groups met together for lunch after the church services, all they could talk about was how amazing the service they attended was. The facilities of both churches sustained damage and both churches used what little they had to repair and restore the infrastructure. Despite the recent tragedy and ongoing restoration efforts, the congregations were vibrant and whole-hearted in their melodious expressions of joy and gratitude. No matter the circumstance, their expression and love for Jesus transcended their surroundings.

“Entering into a place filled with fallen trees, houses without roofs and children begging for food, I expected an atmosphere of hopelessness from the people, but instead, through their actions they have shown me what hope is. I was most impacted at Estancia Christian Centre, where I was amazed, blessed and humbled by the people’s faith and love for God despite their situation. Indeed, even though we went in to be a blessing, I felt that we were tremendously blessed by the people instead,” said volunteer Jason Lee, 24, a photographer.

In what seemed like a surprise ending of a movie, the service at the King of Glory Church concluded and a home-cooked lunch spread was prepared for the group from Team 4. The genuine warmth and hospitality from the pastor and his church members culminated in the giving of handcrafted marble gifts to each of the visiting team members. They explained that the gifts were crafted from the marble quarried from the hills of the community. Their marble products are of international-export quality, which is what made this act of hospitality all the more heart-wrenching. With so little, they showered the team with food and gifts that were a source of income for them. 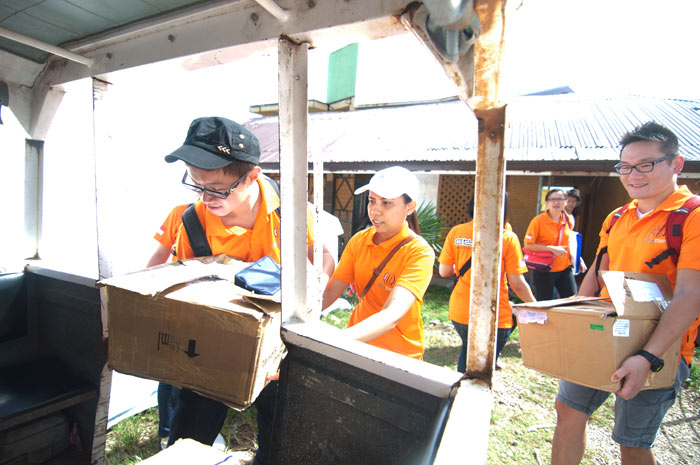 After such a humbling and awe-inspiring first encounter with the people in Iloilo, Team 4 was more than determined to do good as they deployed to two sites to conduct the first day of relief operations. Group 1 headed to Bulak-Norte, Batad, while Group 2 set up in the Estancia Plaza, the municipality center.

The first day of operations saw each team member enthusiastically helping to set up the clinic from registration, to triage, to consultation and lastly, pharmacy. This registration-to-pharmacy set up was the modus operandi, with each member finding their strength in their various roles in this process. A unique attribute of the CHC-CityCare medical relief operation, which sets them apart from other medical relief agencies is the non-medical attention given to children. Intentional programming and resources were given to bring love, attention and joy to the children who are on-site, while their relatives are under medical consult. Team members engaged the children with various games, snacks and antics. Many of the team members were touched by how much joy and laughter the children derived from playing with simple items like empty water bottles—a stark contrast with iPad-hungry children back home in Singapore. One member noted that as the team played and tumbled with the children, each burst of laughter and giggles from the children radiated outward with parents and grandparents also laughing at the silly antics of their children playing with these visitors from another land. The strategy to bring joy to the children was contagious, infecting both young and old. Team 4 was also not spared from this “contagion”.

Upon the conclusion of the first day of operations, the team packed up all the stores and returned to base hungry and tired as no one had touched a bed for more than 36 hours. But prior to calling it a night, the team had their first end-of-day debrief. These nightly debriefs were to become a daily highlight as this was the time set apart for team members to share any thoughts or reflections from the day with the rest of the team.

The following day began with morning devotion at 6am, followed by a quick breakfast before breaking up into two groups and setting out to conduct relief operations. This became the daily program where the team would rise early, race against sundown to treat all the patients within a particular barangay and then return to base for a debrief. As each day passed and more communities were impacted, within Team 4, beautiful developments were also taking place. The overwhelming majority of Team 4 had never been involved in such relief work, so there was a collective sense of curious uncertainty about what to expect. This was especially so for those with non-medical backgrounds as they had never even treated patients before. However, even after just the first day of relief work, it became very clear that non-medical personnel had a lot to contribute to the medical relief process. Some found their strength in managing people at registration, others had a natural ease with cleaning and dressing wounds. Others, through grit and determination, picked up the art and passion for assembling prescription packets in the shortest time possible. The truth from Ephesians 4:16 became an oft-quoted ethos of the team that “every joint supplies”. As the team quickly became tight-knit and highly effective in the field, the initial curious uncertainty transformed into a confident, newfound sense of purpose.

“The team is made up of individuals with different backgrounds and personalities, but we were able to blend together with one heart, one mind and one purpose – to bring hope and love to others,” said Foo Hui Ling, 28, a hospital operations personnel.

Others with experience in volunteerism and relief work shared during debrief sessions why they signed up with the team. Dr. Eric Kim from Malaysia told the group that he had committed himself to going for a medical mission once a year. He had actually been for one such trip this year, but felt challenged that just because he had given, it didn’t mean that he had fulfilled his obligations. “We can’t rest on our laurels, especially when it comes to serving,” he said.

For this writer, I volunteer for relief and humanitarian work because I want to challenge and remind myself that service is the true expression of my faith and values. I’d feel hollow and empty if my words and gestures were devoid of true and meaningful action.

After five days of intense bonding and service, team members reluctantly departed on various flights depending on their next port of call. Deep friendships were forged and new passions for service were sparked by this first encounter. Team 4 may have disbanded after their first rotation together, but should the need ever arise; they would be the first to answer the call.

Over the course of the rotation, Team 4 travelled to eight different barangay, treating 1,616 patients. Other reflections from Team 4 Members

“The trip was awesome! The team’s attitude was simply amazing, as all were ready to serve and to bless. I was deeply impacted by the long distances travelled by each of the groups to reach the different villages to minister to the needs of the people in those communities. This is what ‘reaching the unreached, touching the untouched” is all about.” – Elaine Chua, team leader

“It was wonderful to be able to serve alongside with volunteers from all walks of life of different ages, nationalities and occupations coming together to avail themselves (time, energy and talent) to serve and witnessing how God worked in us during the mission by bringing us together as a team. Especially those without medical background that were able to help in any way the can to run the mobile clinics smoothly. I’m truly humbled by this whole experience.” – Julian Lee, a nurse.

Brian Liu is a management consultant and a volunteer writer with City News.