Email evidence indicated that some of the accused had checked with the then-managing partner of Baker Tilly TFW LLP, regarding the Xtron bond structure and the scope of disclosure of CHC’s investment portfolio. 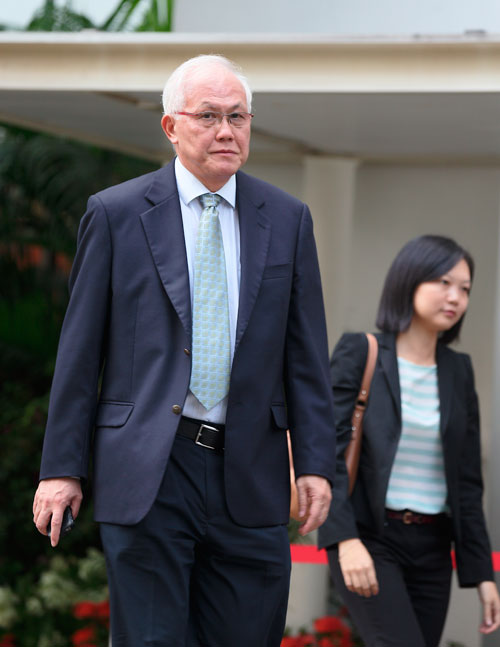 When asked if he had any personal knowledge about the bond subscription agreement between CHC and Xtron, Foong Daw Ching told the court that he knew nothing about it.

This, however, contrasted sharply with email evidence produced by deputy public prosecutor Mavis Chionh, which seemed to indicate that not only was he aware of the bond agreement but that several of the accused had consulted with him regarding specific aspects of the Xtron bonds.

For most of this afternoon in court, the ninth prosecution witness repeatedly answered, “I don't know” and “I can't remember” to lead prosecutor Mavis Chionh's questions.

When questioned about an email Serina Wee had sent to him with the Xtron bond subscription agreement attached, he said today, “I really don’t know why it was sent to me.” Asked if he requested to see a copy of the bond agreement, he replied that he does not like to read agreements and hence did not request for a copy.

Another email Chew Eng Han had sent a “John” showed that he was trying to ascertain how much to disclose of CHC’s full investment portfolio to its investment committee and at its annual general meetings. Chew said in his email that he had cleared his concerns with Foong. Foong told the court he did not remember this.

Yet another email showed Tan Ye Peng expressing his concerns to John Lam regarding the impairment and fair value of the Xtron bonds. Lam replied in the email that he had requested for CHC’s auditor at the time, TFW, to look into the Xtron bond structure to ensure that there was no equity feature in the bond. Lam later informed Tan that “to play safe”, he had asked Foong to look through the structure of the bond.

In one email forwarded to Serina Wee from Tan Ye Peng regarding risks surrounding the Xtron bonds, Wee replied to Tan's email that she had spoken to the church's audit manager from Baker Tilly, Foong Ai Fang, the sister of the witness. Wee told Tan that Ai Fang had said she would speak to her brother about Wee's query.

On the stand today, however, Foong said could not recall any discussion with his sister regarding that matter. While he admitted that he once advised his own church organization about investing in triple A bonds, Foong told the court that he was one of the “weakest” in his firm when it came to matters regarding bonds and investments.

Another aspect the prosecution brought up in court earlier this afternoon was the extent to which Foong had advised City Harvest Church’s leaders with regards to their concerns about related party transactions and bond agreements.

Foong testified that over the years, he had advised CHC on fair value of bonds, impairments and disclosure requirements of related party transactions, but only in very general terms.

Despite refuting DPP Chionh’s statement that he was not the lead auditor of CHC in a “special audit” in 2003, the court also heard that he identified himself as the “lead partner in charge” of CHC’s accounts in a video recording played at a CHC AGM in April 2003. (See script below)