It was an event held in memory of a beloved actress and Mary Kay distributor named Jacqueline Law, marking the first anniversary of her death from pancreatic cancer.

Law became a household name when she landed the lead role in the 1987 Hong Kong television series The Legend Of The Book And The Sword. She also starred in the movie A Friend In Need alongside superstars Simon Yam and Leon Lai. Over her career, Law acted in more than 20 drama serials and 22 movies.

She married Singaporean businessman Liu Chee Ming in 2008. When she was diagnosed with pancreatic cancer in 2010, she retired from acting and moved to Singapore with him. She passed away on Jun. 30, 2012 at the age of 45. Her funeral was attended by glitterati like Kitty Lai, Sheren Tang and Monica Chan, all her good friends.

Law was no ordinary actress: she was an on-fire Christian whose love for God drove her to conduct cell group meetings through the worst days of her cancer treatment. Friends never saw her upset or down: she would simply put on her wig and give testimony to the goodness of God. 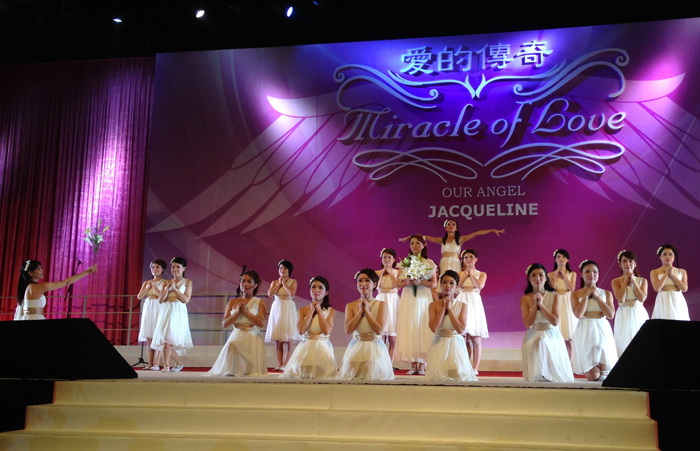 On Jun. 26 this year, her team at Mary Kay held a thanksgiving event at the Hong Kong Convention and Exhibition Centre in honor of Law’s life, called The Miracle of Love. Law’s dream had been to attain the national sales director position in Mary Kay (the top title in the multi-level marketing company) and to hold an 8,000-person thanksgiving event to share the goodness of God when she achieved that. Sadly, she died before she met her goal. As she had achieved the sales target, her team applied for her to receive the status posthumously. The turnout included 7,000 Mary Kay distributors from China who paid their own way to be present at the event.

The event was an eye-opener. It was a powerful testimony of how one person’s life could inspire, influence and impact thousands. During the event, various women who had been mentored by Law took to the stage to share how they were each touched by the love that she had poured into their lives, how she would always share about the love of Jesus. Law left an amazing legacy: people continue to talk about her good works even one year after she has passed away.

The second day of the event was a “spiritual conference” featuring praise and worship, with preaching by four pastors. Singapore pastor Goh Yock Kiang had ministered regularly to Law and her husband through City Harvest Church’s Marketplace Ministry. He preached out of John 4, on how Jesus walked out of his world into the world of the Samaritan woman. Jesus talked about water, but He was really extending eternal life to the woman. Mary Kay distributors may sell products, but they can also share the love of God with their prospects. His message drew applause and agreement, and he ended his message with a salvation altar call that drew over 5,000 first time respondents.

“I am deeply impacted to see the Marketplace Ministry at work,” said Goh. “The Kingdom of God is unstoppable. God works in amazing ways: He used a non-religious event, a non-Christian organization, to bring 7,000 ladies from China through one woman’s story, and 5,000 were saved. It’s also amazing that many of the national sales directors at the event are Christians and have been through Bible school. The Spirit of God is moving powerfully everywhere, working in ways beyond tradition. I am excited to work with these ladies to reach out to more people for God.”