A Taste Of Dignity

Senior citizens encounter a group of disabled individuals who are gainfully employed. 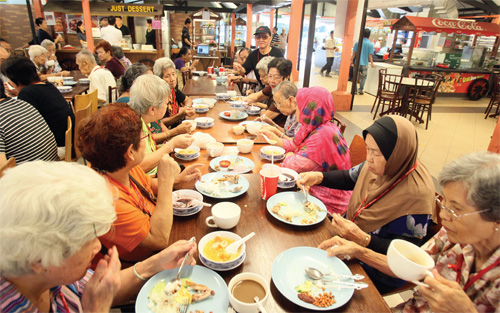 Project Dignity Kitchen is a social enterprise that gives job training and placement to the disabled in Singapore.

For the senior citizens, many of whom are advanced in age, this was a rare opportunity to venture out of their rented one-room HDB flats in the Sin Ming residential estate. These residents mostly live alone, being either single or neglected by their families.

It was no surprise to see the elderly arrive before the allotted time of 11:30 a.m., at Block 26 of Sin Ming Road, where they gathered to board a bus for a tour of the city.

The tour, provided by Project Dignity Kitchen, brought the elderly around to iconic places and landmarks such as Orchard Road, Chinatown and the Esplanade, all of which evoked nostalgic feelings in many of them. Newer places of interest such as Marina Bay Sands captured the elderly’s attention. They exclaimed in awe when they caught sight of the integrated resort.

The city tour was made all the more enjoyable by the entertaining bus driver who kept everyone’s spirits high with his chatter, jokes and singing.

After their tour, the volunteers and senior citizens proceeded to lunch at Project Dignity Kitchen. They are part of a growing list of nearly 2,700 people who have enjoyed the same, under PDK’s initiative known as “Lunch Treat For The Elderly.”

Executive director of PDK, Koh Seng Choon, welcomed the group and deployed many assistants to serve a diverse variety of food. They tucked into local dishes such as lontong, mee siam and nasi lemak. Desserts such as tau suan, red and green bean soup and bubor hitam made for a sweet end to the meal.

During lunch, the diners were welcomed by a blind youth, Norjumanese, who spoke fluent English, Mandarin and Malay. He explained objectives of Project Dignity Kitchen and told of what he is employed to do at the Kitchen.

The group was amazed by how dexterously he distinguished bills of different denominations just by feeling their Braille marks. The talk ended with Norjumanese performing a Mandarin song for his elderly audience.

Following the lunch was a certificate award presentation by Koh, who presented a basic food handling certificate entitling a new staff member to a job at Project Dignity Kitchen after a six-week training stint. The new staff member has difficulties walking and requires the use of a walking stick. This, however, did not deter him from getting trained at PDK.

Susan Toh, 48, one of the CHCSA volunteers who accompanied the elderly that morning, stated that the treat was an “eye-opener for the elderly.” They were clearly inspired by how workers advanced in age or with disabilities could keep up promptly with orders from diners and were able to whip up tasty dishes.

“One of the senior citizens came to tell me that she would like to sign up for a course at Project Dignity Kitchen. She initially thought that her weak arm would prevent her from being able to support herself. However, after having witnessed all that she saw here, hope has been rekindled in her heart,” said Toh.

“The whole event is very pleasant and enjoyable,” commented Choo Leng Keow, 60. “And the food is delicious!”